Demonstrations to capture the student's imagination by Adrian Guy of Blundell's School.  In this issue: Flame colours in burning hydrogen

This demonstration is based on an idea of Georgina Batting, head of science at Blundell's School. Igniting balloons filled with hydrogen gas is an exciting, well-known and much loved demonstration. But, by adding some metal salts to the balloons, it becomes a demonstration of flame colours.

The thermal energy produced by the combustion of hydrogen gas in air is sufficient to excite electrons within the metal ions to higher energy levels. On 'falling' back to their 'ground state' the absorbed energy is released as photons of light. According to the relationship between energy (E) and frequency (λ),  ie E  = hλ, where h is Planck's constant, the higher the energy of the photon, the higher the frequency. 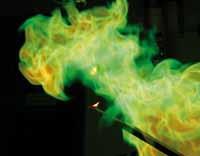 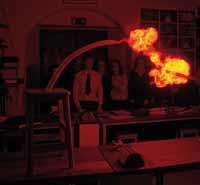 Using a clean, dry pestle and mortar grind 0.1 g of your metal salt into a fine powder resembling icing sugar. Pour the powder into a balloon using a piece of folded paper as a funnel. Using a small syringe, add 1 ml of water to the balloon. Fill the balloon with hydrogen gas and tie a knot to seal. Rotate the balloon to coat evenly the inside surface with the metal salt. Attach a 2 m length of cotton thread to the knot and tie the balloon to a secure object, allowing it to float ready for ignition.

To ignite the hydrogen, tape a splint to one end of a metre rule, ignite the splint and, at arm's length, set fire to the balloon. The ensuing combustion and expansion of gases will create a loud 'thud' and a coloured flame.

For the best effect do the demonstration in a darkened room.

Exploding balloons of hydrogen gas laced with metal salts serves as a useful revision lesson on metal ions and their corresponding flame colours covered at GCSE. At A-level, flame colours form part of the evidence used to postulate the electronic structure of atoms. This is also a nice demonstration to save for end-of-term lessons.

Examining flame colours is a common activity at KS3. The standard method is to dip a Nichrome or platinum wire in hydrochloric acid followed by a metal salt and then hold the wire tip in a Bunsen flame. Alternatively, with younger pupils, you might want to try using damp splints to dip into samples of metal salts instead of using Nichrome wire - this gives excellent results.

Barium chloride is toxic if swallowed and harmful by inhalation. Lithium chloride is harmful if swallowed and irritating to the eyes and skin. Hydrogen readily forms explosive mixtures with air. Keep the hydrogen supply away from naked flames while filling the balloons. Also, be cautious to keep the filled balloons well away from naked flames. Make sure the audience is more than 50 m away from the balloons because considerable heat and balloon debris are produced. Wear goggles and ear defenders when igniting the balloon.