Demonstrating the photosensitive, free radical reaction between hydrogen and chlorine

October 2017: We recently reviewed the safety of our demonstration articles, which highlighted concerns over the suitability of this demonstration. Because of this, we’ve removed the procedure and kit list from this article and do not recommend doing this demonstration in schools

Conventional methods for this demonstration often rely on producing uv radiation by burning magnesium ribbon to initiate the reaction. The reaction mixture is contained within a stoppered boiling tube and the burning magnesium ribbon is dangled nearby. The resulting explosion ejects the cork from the boiling tube at considerable speed. I have used this method before, but have been rarely satisfied with the outcome. I was therefore delighted to find a method that involves using a thin-walled glass bulb which is filled with the gases and thrown out of an open window so that sunlight initiates the reaction. This method replaces the glass bulb with a polythene food bag.

Free radical reactions are studied at year 12, including free radical substitution reactions of halogens with alkanes, and the role of CFCs in the catalytic decomposition of ozone. 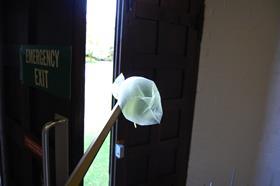 Chlorine absorbs uv light, the energy of which is equivalent to ca 400 kJ mol-1. This is more than the Cl–Cl bond strength (242 kJ mol-1) in the chlorine molecule, which consequently splits into two chlorine free radicals with one unpaired electron each: 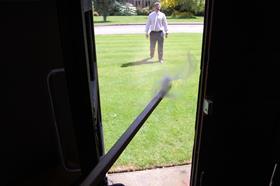 After this initiation step, each chlorine radical can react, on collision, with a hydrogen molecule by abstracting a hydrogen atom to form hydrogen chloride and a hydrogen radical:

The hydrogen radical can then react with a chlorine molecule to produce another chlorine radical:

These two propagation steps set up a chain reaction, which terminates if two radicals combine:

The probability of each of the four steps in the chain reaction is based on the relative concentrations of the species involved. The likelihood of the termination step is improbable, owing to the much higher concentrations of H2 and Cl2. Therefore, the chain reaction should propagate through a vast number of H2 and Cl2  molecules before it terminates.