Science for the 21st Century Initiative (SCI) aims to cultivate an interest in, and knowledge of, the wider aspects of science and technology among A-level students

Science for the 21st Century Initiative (SCI), supported by the Royal Society of Chemistry, the Royal Society, other charitable organisations and industry, began in the late 1990s when I was at King's School, Canterbury. The aims of this initiative - to inspire an enthusiasm among sixthformers studying science and give them the opportunity to experience the real process of science - as well as the format, remain essentially unchanged. Now organised from Warwick School, the initiative comprises a network of five other schools in the area - King Edward VI School for Boys, Stratford, Myton School, King's High School for Girls, Lawrence Sheriff School, and Kingsley School - and Warwick University. The three components of SCI are:

Here I focus on examples of the research done by some of the students on this project.

An introduction to research

Y12 students opt to receive training, one afternoon a week (for two hours), in analytical and biological techniques before taking on research projects in their A2 year. Typically, 30-35 students from the five schools participate in the training and about half of these students go on to do research projects.

The analytical work is done at the local university and covers:

Training in biological sciences is also done in conjugation with the university, and includes enzyme studies and DNA fingerprinting, for example.

The research projects done so far at King's School, Canterbury, and more recently at the Warwick schools, have been linked to nitric(II) oxide in some way since this is my area of expertise and one which I remain research-active in. Up until the 1980s, nitric(II) oxide's main claim to 'fame' was as an atmospheric pollutant. However, all this changed as its multi-functional role in human physiology was uncovered. Nitric(II) oxide (NO, nitrogen monoxide) is a neurotransmitter,1 a smooth muscle relaxant,2 an inhibitor of platelet aggregation and adhesion to blood vessels,3 an immune system activator,4 and a cytotoxic agent.5

Despite its many interactions with biomolecules, however, nitric(II) oxide's lack of reactivity with organic molecules outside living systems is still a puzzle to chemists. This provided the motivation for a group of eight sixthformers (Y13) at King's School, Canterbury to investigate NO as a selective oxidant of primary alcohols.

Nitric(II) oxide as a synthetic reagent

From the literature searches, the students found that nitric(II) oxide couples easily with other radicals. It is particularly reactive with oxygen-based radicals and combines with the superoxide radical anion to give the peroxynitrite anion, and with the phenoxyl radical to give the corresponding nitrite ester. Carbon-centred radicals, derived from the photolysed nitrite esters, also combine with nitric(II) oxide to form C-nitroso compounds.

Another literature search revealed that a commercial application of this reaction, the Barton reaction,6,7 uses in situ generated nitric(II) oxide to synthesise steroids, eg aldosterone (1). In this reaction a methyl group in the cyclic system is oxidised to an aldehyde (see Scheme 1). The students hypothesised that suitable model compounds, with some structural features in common with the industrial substrates, should react with nitric(II) oxide donors in a Barton-like reaction. After a discussion with myself, they decided to try and convert methylbenzene to benzaldehyde and/or benzoic acid, and certain cycloalcohols to cycloaldehydes and cyclocarboxylic acids by using nitric(II) oxide as the oxidising reagent.

The students, working for two hours per week, did several experiments. They reacted certain ring-strained cycloalkyl alcohols (see Scheme 2) with a large excess of a nitrite ester and a nitric oxide donor drug under photolytic conditions. They established the product profile from these reactions with GC-MS and NMR spectroscopy. Deaerated and unprotected cycloalkylmethanols (1, a-c) (see Scheme 2), upon photolysis with t-butylnitrite (a nitrite ester), gave a moderate yield of the corresponding cycloalkyl carboxylic acids. However, uv irradiation of the methylated derivative of cyclopropanemethanol (1, a) in the presence of either a peroxide initiator (di-t -butylperoxide) and S -nitroso-N -acetylpenicillamine (nitric oxide donor drug) combination or t-butylnitrite gave the anticipated improvement in the amount of the product following deprotection of the starting cycloalkanol.

The students did GC-MS and NMR analyses of the reaction mixtures and discovered the presence of cycloaldehydes and cyclocarboxylic acids. Their experiment was a success.

The students attempted to explain their data by suggesting that the cyclocarboxylic acids detected in these reactions are formed via the intermediate nitroso compounds in a manner similar to that encountered in the Barton reaction. They proposed a radical-mediated mechanism to account for the observed products (see Scheme 2).

Their research revealed that nitric(II) oxide can act as a mild and therefore selective oxidant of suitably functionalised molecules. It paves the way for exploring the use of nitric(II) oxide gas as an externally added reagent in conjunction with an initiator. This method could be incorporated into the synthesis of a suitable target molecule for which the key step involves the formation of an intermediate nitroso compound and, as such, the students' discovery represents an elegant extension to the Barton reaction.

Nitric(II) oxide as a mutagen

The detrimental effects of NO on genetic material have also been a subject of intense study worldwide. Another group of six Y13 students at the King's School, Canterbury referred to a previous study of the effect of nitric(II) oxide gas on retinol which had indicated that NO causes oxidative degradation of this biomolecule.8 Research involving exposure of nucleic acid bases9 to nitric(II) oxide had also shown that these building blocks of DNA are susceptible to a chemical change, which would lead to a change in genetic information (ie in DNA fragments). However, these investigations were inconclusive and the researchers were not convinced by the efficiency of their method in delivering the gas to the reaction mixtures.

Inspired by this work, the students started their own investigations into the adverse bioactivity of this molecule. They reacted aqueous solutions of adenine, one of the building blocks of DNA, with excess quantities of nitric(II) oxide, in the presence and absence of air, at physiological temperatures. (The NO in these reaction mixtures was generated in situ  through the photolysis of S -nitroso-N -acetylpencillamine or S -nitrosoglutathione.) The students detected hypoxanthine in the reaction mixtures (see Scheme 3), and concluded that these S -nitrosothiols are better nitrosating agents of free adenine in aqueous aerobic solutions than nitric oxide gas itself. They suggested that the administration of NO via the slow photolysis method elevates its concentration significantly above that achieved through purging the reaction mixtures with the gas from an external source. The group went on to produce evidence for their theory. For example, they compared the extent of reaction achieved (measured by hypoxanthine levels) by exposure of adenine to the externally applied nitric(II) oxide for the same length of time as the photolytic reaction with these nitric(II) oxide donors.

The team concluded that this action of nitric oxide, under abnormal conditions, could give rise to some human cancers. Under physiological stress (eg activated immune system or at elevated oxygen tension in an infected tissue), the in vivo nitric oxide levels may be abnormally high. Under these circumstances, the N2 O3 concentration may be sufficiently raised to cause mutations in the key genes (oncogenes and/or tumour suppressor genes) that may trigger tumour growth. (This work was published in Chemistry Review.)10

As an extension of the previous work, and to gain a clearer understanding of the in vivo process, another group of three students, one Y13 student from Warwick School and two Y13 students from King Edward VI School for Boys, Stratford, is currently reacting in situ generated derivatives of nitric(II) oxide with other DNA bases, eg 5-methylcytosine, cytosine and guanine. 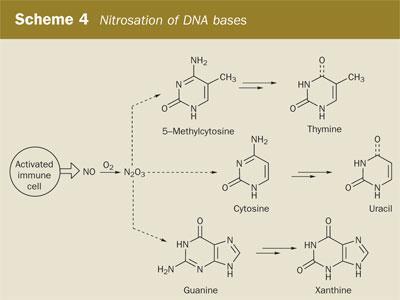 The students intend to subject the DNA bases indicated in Scheme 4, in turn, to the nitrosating agents (eg nitrosothiols) and oxidants (eg peroxynitrite). They will measure the concentration of the resulting products viz thymine, uracil and xanthine in the reaction mixtures by spectroscopic methods. By comparing the proportion of the products obtained with nitrosating agents and oxidants, the students hope to ascertain the relative contribution of deaminative and oxidative damage to the DNA.

This information may help us to formulate approaches that counteract nitric(II) oxide-initiated mutagenesis. Ultimately, it may suggest therapies that can be used in our fight against those cancers that are linked to the inflammatory response from chronic exposure to nitric(II) oxide. The corresponding nucleosides, nucleotides and eventually intact bacterial DNA will be investigated in future experiments by sixthformers. 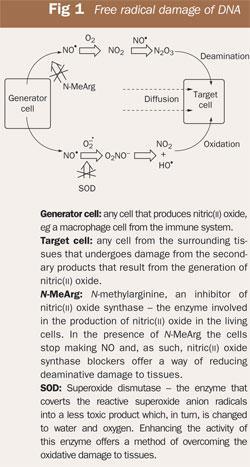 Research on the ageing process in animals has shown that the rate of oxygen consumption, intricately linked with the excessive intake of food, is an important factor. A calorie-restricted diet seems to point to an increase in the life span of an organism. An explanation for this is that at high metabolic rates, the body produces highly damaging free radicals - eg nitric(II) oxide - which attack the genetic material located in the energy-generating machinery of a living cell (ie mitochondria) in a way that leads to abnormalities associated with ageing.

Excited by this topical area of science, a team of three students, two (Y13) from Warwick School and one (Y13) from King Edward VI School for Boys, Stratford, will expose, over different time intervals, DNA obtained from mitochondria to nitric(II) oxide and other free radicals (superoxide, hydroxyl etc) that are produced by the body as byproducts of metabolism. Reaction mixtures will be analysed to detect any chemical changes in DNA. Students are hopeful that their results may offer an understanding of the mechanism involved that leads to the malfunctioning of the body's tissues in a manner which is linked to the ageing process (eg loss of elasticity of the skin). Two likely mechanisms that can lead to mitochondrial DNA damage as a result of the production of highly reactive radicals are summarised in Fig 1.

A Y13 chemistry student from Warwick School is speculating whether it would be possible to synthesise new nitric(II) oxide donor drugs (eg S -nitrosothiols) and test them for their ability to release nitric(II) oxide. As a part of this investigation the student will enclose each of the newly made compounds, along with a suitable initiator (eg a peroxide), in aqueous or aqueous alcoholic solutions of known concentrations in microscopic phospholipid vesicles (prepared by standard methods). An appropriate dye (normally impervious to the lipid bilayer) will be included in these vesicles, which will be subjected to light. The student will analyse the external medium to follow the leakage of the enclosed dyestuff at regular intervals. The student hypothesises that the greater the effectiveness of a drug in releasing nitric(II) oxide, the greater the leakage of the enclosed dye from the vesicles to the external solution.

Scientific training with a future

The strength of SCI lies in the wide range of opportunities it offers its participants. The rewards for the students and teachers of this programme are several - it helps to create a genuine interest in pure and applied sciences through self-motivated research work; it emphasises presentation skills through communication of the impact of science and technology in everyday life; and it encourages collaboration between local communities, groups of schools and higher education institutes through pooling resources and securing sponsorship from local business.

The development of clusters of schools nationally, each linked to a local university, would allow students to benefit on a nationwide scale. It would also offer an ideal opportunity for useful partnerships between state and independent schools. The biennial conference could be hosted, on a rotational basis, and similarly the editorial production centre for N-Lighten  could be shared by a number of different clusters. Currently Oundle School in Cambridge is being developed into a centre to support its own cluster of five or six local independent and state schools, which will link with Cambridge University. We are exploring the possibility of setting up clusters with other partner universities around the country.