Sinister caesium: the birth of a meme 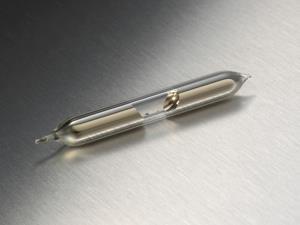 As I discussed in my last blog post, the reactions of caesium and rubidium with water are not as impressive as people tend to think. But given the potential for hydrogen production is so limited compared to the lower mass metals, where did the idea that caesium reacts so dramatically come from?

Before video streaming over the internet became common, most people witnessing the reaction of caesium with water were likely to have done so only through a limited number of educational videos. Perhaps one of the most enduring of these was the Open University production Elements Organised: a Periodic Table, which is held up by many as the benchmark 'honest' reaction of caesium with water.

In this video, shown to a generation of school students, a small piece of caesium shatters the glass vessel in which it reacts – but many have failed to reproduce the effect.

From the BBC Programme "Elements Organised: A Periodic Table"

I was able to speak to David Johnson, the writer and presenter of the original program and he agreed to examine some of the original archive footage and offer some insights.

David says the biggest problem with recording footage is the clean transfer of metal to water: ‘... the melting temperatures are very low for both rubidium (39.5°C) and caesium (28.4°C). Caesium melts easily in the hand, especially when the hand is that of a sweating demonstrator! Rubidium is not very different.’ Once liquid, the metal tends to adhere somewhat to the glass of the ampoule. The most recent footage he recorded was in 2002 and David's solution was to deliberately warm both metals until the liquid was sufficiently runny before quickly pouring into the water: ‘the results were a flash and a loud explosion with no obvious difference in violence.’

Struggling with some of the details from Elements Organised as he cast his mind back a further 24 years, David had the feeling that transfer on the 1978 video was a problem, too. Numerous experiments were shot with some samples cooled and others warmed: ‘In one of the shots before the drama of the explosion, it is obvious that pouring is taking place. In the caesium shot, it is hard to see whether what is dropped is the metal or a fragment of sample tube with the metal in it.’

As David's experience with caesium grew, it caused him to reflect on the drama of that most memorable shot: ‘I have often wondered if a small piece of sample tube with metal adhering to the inside hit the surface and the explosive reaction blew it across the water against the wall of the crystallising dish, thus shattering the glass. Although some of what is dropped sinks, some, I think, does not; it remains on the surface. One of the frames shows two torpedo-like tracks proceeding very rapidly across the surface to the right [where] the dish breaks.’

David confirmed the experiment was not rigged to add drama as in the Brainiac video, but it was obviously the best from a range of takes. He acknowledged the reaction wasn't representative of what you would normally expect to see at this scale: ‘Both at the time and later, my impression has been that there is no detectable difference in the violence of reaction of rubidium and caesium and the drama of the caesium explosion in [this clip] was purely a matter of luck.’

Nearly 40 years later and it seems caesium’s dirty reputation is here to stay. The Periodic Videos’ current default caesium video shows the team, following their earlier disappointment, going to great lengths to transfer the metal to water effectively. The audience is told the previous failure was down to the caesium sticking in the ampoule – nobody mentions the experiment is being repeated with a much larger sample. Despite using five times as much material as in their other alkali metal videos, the reaction is still not nearly as violent as their recording of the reaction of potassium. Perhaps it’s time to offer caesium’s reputation a reprieve?

In the upcoming September issue of Education in Chemistry, Declan investigates what’s really going on in alkali metal reactions in water