3
Why is my chemistry curriculum White?
Analysis

Why is my chemistry curriculum White?

The facade of Oriel College at the University of Oxford hosts a number of statues of men with a role in the college’s history. Cecil Rhodes is among them – a 19th century British imperialist and the founder of the De Beers diamond company. A campaign, initiated by students, to get his statue removed has been building momentum for a few years, but so far he remains in place.

The Oxford situation hasn’t been happening in a silo. It was students at the University of Cape Town that started the Rhodes Must Fall movement in 2015, successfully demanding the removal of a similar statue on their campus. Students around the globe soon started demanding their universities take action to address their colonial past. The global 2020 Black Lives Matter protests, after the murder of George Floyd in the US, further shone a spotlight on this issue. 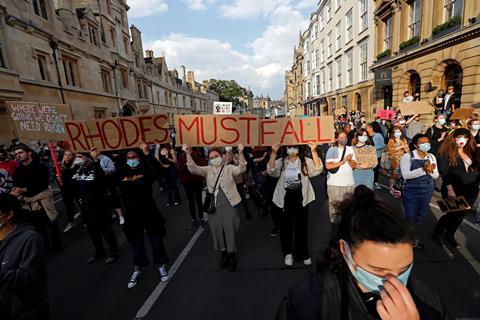 Schools haven’t been exempt from this pressure. In June 2020, for example, the Bolton School received an open letter from hundreds of alumni and current students asking it to stop portraying its founder Robert Lever as a hero. Lever established the personal and home care company Unilever and was a strong supporter for the expansion of the British Empire.

The Bolton School letter also demanded colonialism is introduced into the history curriculum at the independent school. The authors cited the results of the Impact of Omission survey, coordinated by two university students aiming to get Britain’s imperial past added to the compulsory state school national curriculum. Of the 56,000 plus people surveyed, only 7% said they had learned about Britain’s colonisation of Africa at school whereas 86.2% had been educated in-depth about Henry VIII.

Proponents of decolonising curriculums typically focus on the history curriculum; but the science curriculum (both in schools and universities) is also littered with the fingerprints of colonialism.

Students learn about Isaac Newton, Albert Einstein and many other White men, but rarely about Black, Asian and minority ethnic (BAME) scientists and their contributions to science. They are told that Thomas Edison developed the light bulb, but rarely that his device was useless without a modification by the Black American inventor Lewis Latimer. Medicinal chemistry is often taught without mention about Henrietta Lacks – the African-American whose cancer cells were taken without her knowledge to create the critically important cell line HeLa, still used for medical research today. In analytical chemistry, few lecturers mention that the man behind Raman spectroscopy is an Indian physicist.

Educators should also seek to highlight contributions from present-day Black, Asian and minority ethnic scientists. Shifting the dial away from teaching historical research and towards modern research makes decolonising content much easier, says Paul Taylor, a professor of chemical education and dean for student education at the University of Leeds. ‘If we focus more on presenting contemporary research we will just naturally pick up science with broader foundations and a broader, more representative set of scientists producing it,’ he explains.

Adding Black, Asian and minority ethnic faces to the curriculum helps to undo the message that science is an exclusive club that admits only White researchers. This message, even if not intentional, comes at students from all directions, not just from educators. A science Nobel prize – our subject’s biggest gong that receives international media attention every year – for example, has never been awarded to a Black researcher.

The impact this has on Black, Asian and minority ethnic students is well established. The 2019 joint National Union of Students (NUS) and Universities UK report Closing the Gap revealed a 13% gap between the proportions of BAME students and their White counterparts awarded a 1st or 2.1 degree classification. This is called the awarding or attainment gap. ‘Everyone was sort of aware of this issue, but it hadn’t been put on the agenda so prominently before the Closing the Gap report and certainly not from Universities UK’s perspective,’ says Amatey Doku, who headed this report while working for the NUS. His current role is as a general higher education consultant that advises on diversity and inclusion matters for the Nous Group.

The problem gets worse the further up the academic pipeline you look. In 2020, the Royal Society of Chemistry conducted an analysis showing that the UK’s academic pipeline is failing to retain minority ethnic chemists at every stage, which is particularly pronounced for Black chemists. The proportion of Black chemists drops from about 5% at undergraduate to just over 1% at postgraduate level. And the number of Black chemistry (and also physics) professors was found to be zero (rounded to the nearest five).

The reasons behind attainment gaps and leaky pipelines are multiple, hugely complex and very far from easy to fix. However, showing the non-White faces behind scientific achievements is an important step towards helping Black and minority ethnic (BME) students see that there is a place for them in science.

Lara Lalemi, a chemistry PhD student at the University of Bristol and founder of the inclusive education initiative Creative Tuition, says that learning about Chandrasekhara Venkata Raman during her master’s degree enabled her to envision a future for herself as a scientist. ‘It felt empowering to know that the technique that I was using was invented by an Indian man and that he won a Nobel prize for it,’ she explains. When she learned about the technique as an undergraduate Raman the person wasn’t discussed, she says. ‘There were no people from Indian heritage or African heritage, like me, discussed in [my undergraduate] lectures.’ 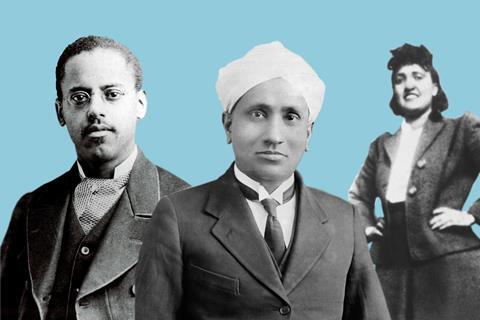 The curriculum currently omits their names, but Latimer’s, Raman’s and Lacks’ contributions to science must not be ignored

There is some overlap here with equality, diversity and inclusion initiatives, which also typically request the unveiling of the Black and minority ethnic faces behind historical and contemporary science. But to decolonise your curriculum you must go one step further, says Neil Williams, director of undergraduate studies for the faculty of science engineering and computing at Kingston University in London. Why contributions from Black and minority ethnic scientists have generally stayed hidden needs to be explicitly addressed.

‘An inclusive curriculum can ignore the history, the politics, the power structures and the institutional hierarchies and how they’re set up,’ says Neil. ‘Decolonising the curriculum is redressing the power imbalance not just making sure everybody can see themselves reflected in the curriculum,’ adds Katherine Haxton, senior lecturer in chemistry at Keele University.

‘If we don’t respond to the political side of it, and don’t talk about racism and anti-racism, we’re missing the point,’ says Leeds’ Paul.

Charles Darwin should be praised for his contributions to our understanding of evolution but his belief in an evolutionary hierarchy, that places White races above all others, must also get an airing in class. The same is true of contemporary scientists with racist views. Students should learn about James Watson’s role in uncovering the DNA double-helix but also of his frequent racist outbursts.

Acknowledging racism in science shows solidarity among students and empowers everyone. But also, having these discussions with students again and again, as they progress though the education system, will help tackle the wider societal issues of casual and systemic racism.

What we teach and how we teach it

Curriculum content should also be diversified to include research relevant to the Global South, says Lara. ‘We should be talking more about how climate change is going to affect different countries differently,’ she says. With the Global South to be hit harder than the Global North, technologies such as those to improve water purity in the Global South should also appear more prominently in the curriculum, she adds.

Educators looking to decolonise their teaching also need to look at their teaching style, says Neil. There is plenty of evidence now that the traditional, passive way universities have taught throughout history – lectures and closed-booked exams – predominately favours White students. He – and others – have now pivoted towards active teaching practices instead to help address the attainment gap. ‘Research shows that more interactive, student-centred learning benefits all students and helps narrow awarding gaps for underrepresented students in STEM,’ he explains.

Many chemistry educators are now acutely aware of their students’ desire for the fingerprints of Britain’s colonial past to be scrubbed from the curriculum. Some have initiated the process of making changes to their own teaching content and style to reflect this. It is widely thought, however, that a top-down directive will also be needed if wholesale, lasting changes are to be seen.

For schools, Tippu Sheriff, a senior lecturer and director of chemical sciences programmes at Queen Mary University of London, says that changes must be made to the national curriculum. For universities, directives should come from the top. ‘Universities need to take some tough organisational decisions about prioritising this work,’ says Amatey. ‘Changing the performance framework is a pretty critical part of driving behaviours.’ Some universities, including Keele and Leeds, have started looking at this. Funding schemes, such as the Royal Society of Chemistry’s inclusion and diversity fund, also have a potential role in driving curriculum decolonisation forward.

An important point to end on is that decolonising the curriculum is a job that needs all hands on deck. ‘This can’t be something that minoritised groups do alone,’ says Katherine. ‘We can’t hire academic staff and expect them to thrive in the system and change the system from within. That’s just some magical thinking.’