John Emsley looks at the element that’s so useful, so abundant, but so difficult to extract

Aluminium is the third most abundant element, and the most abundant metal, in the Earth’s crust. The principal ore is bauxite, which contains a mixture of aluminium hydroxides.

No living species has been discovered that requires aluminium to sustain life. In the 1970s aluminium was believed to be a cause of Alzheimer’s disease, supposedly having been found in the brains of those afflicted. However in the 1990s new analysis showed that aluminium was not present in anything but minute traces. It appears the earlier tests had mistaken iron for aluminium.

Meanwhile, it has its medical benefits: aluminium hydroxide can be taken as a long-lasting antacid. 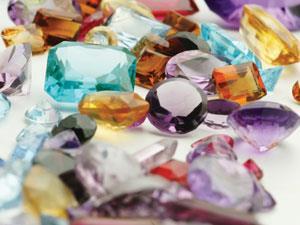 Aluminium oxide coloured by traces of other metals can form gemstones

The ancient world knew it in the form of gemstones coloured by traces of other metals: iron produces yellow topaz, cobalt creates blue sapphires and chromium makes red rubies. All these are now easy and cheap to manufacture artificially, and rubies and sapphires are used for lasers.

The ancients employed aluminium in the form of alum (KAl(SO4)2.12H2O), which occurs naturally and was used as a fixing agent for dyeing.

Crystalline aluminium oxide is transparent and almost as hard as diamond. The mineral corundum contains aluminium oxide, and is commonly used in sandpaper.

Although aluminium oxide was known to contain a metal, it defied the usual methods of separation. The first person to produce aluminium, in 1825, was Hans Christian Ørsted in Copenhagen, Denmark. He made aluminium by heating the chloride with potassium. The new metal was expensive, so much so that in the 1860s the Emperor Napoleon III of France had a set of cutlery made of it to impress visitors.

Two young men, each working independently, were to change all that in 1886. A 21 year old US student, Charles M Hall, and a 23-year-old French student, Paul-Louis-Toussaint Héroult discovered that aluminium oxide could be reduced to aluminium electrolytically if it was dissolved in molten cryolite (sodium aluminium fluoride, Na3AlF6).

This method of extraction is an energy intensive process. Even so, the metal is the most used after iron, with global production of around 40 million tonnes a year. A similar amount comes from recycling aluminium products. This is done by heating them in a molten salt flux of sodium and potassium chlorides, which absorbs the impurities in the scrap. A pool of molten aluminium then sinks to the bottom of the furnace and can be tapped off. Recycled aluminium requires only 5% of the energy needed to extract aluminium from its ore.

Aluminium has many uses. Its ability to conduct electricity makes it ideal for cables. It also has very good reflectance properties and is used in insulation, heat-reflecting blankets and solar mirrors. Aluminium powder is used to make ‘silver’ paint.

Alloying aluminium with small amounts of copper, or with magnesium/silicon, makes the metal much stronger. It is then used many different ways to make things such as street lamps, car bodies and drinks cans. It is lightweight, strong, and protected from air and water by the tough, micron-thick, oxide film that forms rapidly on its surface.

Aluminium sulfate is used in water purification as a flocculating agent. Water which is cloudy with silt and organic matter can be cleaned by adding a solution of aluminium sulfate together with calcium hydroxide. This precipitates voluminous aluminium hydroxide, which carries the impurities down as it settles.

A more recent development in aluminium technology is aluminium foam. This is made by thickening the molten metal with silicon carbide fibres and then adding a metal hydride to the mix. This releases bubbles of hydrogen and produces a solid foam as the mixture cools. The material is used to line traffic tunnels because it acts to muffle sounds and is very durable.