John Emsley, University of Cambridge, takes you on a tour of the periodic table.

In this issue: Americium emits deadly radiation - but every home should have some

On 11 November 1945 Glenn T. Seaborg, a young nuclear scientist from the University of Chicago, was a guest on the popular children's radio programme, Quiz kids, when he let slip that he and his colleagues had discovered a new element. An official announcement was made a few days later, and the following year Seaborg put forward the name americium (Am) for the element.

Seaborg had been working on a project to make atomic weapons, two of which were used to destroy the Japanese cities of Hiroshima and Nagasaki in August 1945, thus ending World War II.

Americium is produced by bombarding plutonium, atomic number 94, with neutrons in a nuclear reactor. This forms plutonium-241 which itself undergoes radioactive decay by losing a β-particle (a nuclear electron) and forms americium-241, atomic number 95. This has a half-life of 430 years and emits an α-particle (helium nucleus) to form element 93, as neptunium-239.

Americium is an 'α-emitter' and so extreme precautions need to be taken when producing or working with the element. Alpha-particles are highly destructive when ejected inside a living cell, often causing irreparable damage, and sometimes cancer. Outside the human body they are relatively harmless, can be stopped by a sheet of paper, and do not penetrate skin. Seaborg was not affected by americium - or any of the radioactive elements he worked with - because he lived to be 86. He died in 1999 not long after element 106 had been named after him. 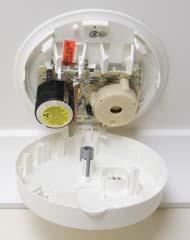 Americium-241 is used in smoke detectors. This isotope costs around $1500 per gram but one gram is enough for more than 5000 detectors. (The other isotope, americium-243, is 100 times more expensive.)

A smoke detector contains 150 μg of AmO2, and relies on the α-rays to ionise the air in a gap between two electrodes, thereby allowing a tiny current to flow. When smoke gets between the electrodes its particles of soot, which are also highly ionised, attach to the already present ions, causing a drop in current. It is this drop in current which sets off the alarm. When smoke is wafted away, the current is restored, and the alarm stops. Although 33000 americium atoms per second undergo radioactive decay in a smoke detector, none of the γ-particles escapes, and thus poses no threat.

Americium also emits γ-rays. These have shorter wavelengths than x-rays, and so are more penetrating and more dangerous. They were once used in radiography to determine the mineral content of bones and the fat content of soft tissue, but are now only used to determine the thickness of plate glass and metal sheeting. The transmission of the rays shows how thick the material is.

Americium can also be made to produce neutrons, which can be used in analytical probes. When an -particle hits a beryllium atom it transmutes this element into carbon, and as it does emits a neutron. The stream of neutrons from an americium-beryllium source is used to test flasks designed to hold radioactive materials, to ensure they are completely radiation proof.

The longer lived isotope, americium-243, is produced in kilogram quantities from plutonium-239. This is the most stable isotope with a half-life of 7370 years, yet this is far too short for any americium to occur naturally on Earth. Even if there had been a billion tonnes of americium-243 when the Earth was formed, this would have reduced to a single atom in less than a million years. All that is used in research has been synthesised in the lab.

Several compounds of americium have been prepared, giving valuable information on the chemistry of this element. Most of these are coloured, such as the more stable AmO2 which is black, and the less stable Am2O3 which is red-brown. The halides are also coloured: AmF3 and AmCl3 are pink, while AmF4 is light brown.