John Emsley, University of Cambridge, takes you on a tour of the Periodic Table. In this issue: cerium, the not so rare earth with down to earth uses

Although cerium is one of the so-called rare earth metals (aka the lanthanoids) it is the most abundant of them and is as common as zinc. It was discovered as the ore cerite (cerium silicate) which was found by Axel Cronstedt at a mine in Vestmanland, Sweden. He thought it was a tungsten ore but Wilhelm Hisinger and Jöns Jacob Berzelius proved in 1804 that it was a new element, which they named after the recently discovered asteroid, Ceres.

Attempts to get a sample of the pure metal at the time were doomed to failure - even heating cerium chloride with potassium failed to produce it. It was not until 1875 that two American chemists, William Hillebrand and Thomas Norton, first obtained a pure specimen, achieved by passing an electric current through molten cerium chloride.

In the century following its discovery, cerium found use as a medical treatment and in gas mantles. In 1854, medic James Simpson of the University of Edinburgh, reported that cerium nitrate supressed vomiting and especially that associated with morning sickness. Others prescribed it as a treatment for sea-sickness and as a cough suppressant for those with tuberculosis.

Over-the-counter cerium medicines such as Novonaurin and Cerocol tablets were on sale well into the last century. Eventually cerium fell out of favour with doctors and looked unlikely to return until, in 1995, a weak solution of cerium nitrate was found to be an effective first treatment for bathing the skin of people suffering extensive third degree burns. This is now standard procedure in some specialist burns units.

Cerium was needed for the production of incandescent gas mantles. Early gas lighting relied on the presence of traces of benzene which burned with a bright flame. Benzene could be extracted and sold more profitably to the chemical industry. Gas mantles were devised and these shine brightly when heated. They were made of thorium oxide plus 1% cerium oxide. The latter was added to produce a softer glow. It also acted as a catalyst ensuring more complete combustion of the gas.

Today cerium comes from rare earth ores, and cerium oxide, CeO2, is the most important outlet for cerium. It remains behind when the other metals are dissolved out using hydrochloric acid. The insoluble residue is known as cerium concentrate and current production is about 63 000 tonnes a year. This is likely to increase this century as more uses are found. 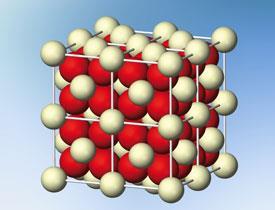 The crystal structure of cerium oxide

Cerium oxide is important in specialist glass. Adding 2% protects glass against damage by radiation, x-rays, and cathode rays, and it will also filter out UV light. Most damage caused by UV is due to wavelengths below 400 nm, but these are strongly absorbed by cerium. Optical glass for lenses also includes cerium, along with lanthanum and yttrium, to provide a high refractive index and low colour dispersion. Cerium oxide concentrate, as a slurry in water, is used in place of ferric oxide rouge for polishing optical glass, giving a better finish more quickly to lenses and screens.

Cerium oxide is also important as a catalyst. It is used by the chemical industry for the production of alcohols, phenols, and ketones. It is also part of the catalyst of catalytic convertors used to clean up vehicle exhausts. It enhances the performance of the other metals that are present, and it is thought it does this by acting to store and release oxygen atoms. These convert CO to CO2 as well as oxidising unburnt hydrocarbons to CO2. Cerium is also used to reduce the emission of micron sized particulate emissions from diesel engines.

So-called self-cleaning ovens have CeO2 incorporated into the walls and there it catalyses the oxidation of cooking resides, which are also mainly carbon based.

Until recently, cadmium red was the preferred pigment to colour containers, toys, household wares, and crates, but cadmium is now considered environmentally undesirable and its pigments are being phased out in favour of cerium sulfide, Ce2 S3. This gives a rich red colour, stable up to 350°C, and it is completely non-toxic.

Cerium is used in many other ways, such as in flat screen TVs, low-energy light bulbs, magnetic-optic CD disks, and it is part of the core material in carbon-arc electrodes for film studio lights and for flood-lighting large venues. 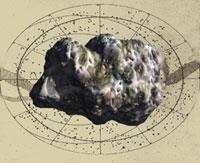 Atomic number 58; atomic weight 140.116; melting point 799°C; boiling point 3426°C; density: 8.2 g cm-3. Cerium is a member of the lanthanoid group (row 4f) of the periodic table. Its preferred oxidation state is +3. Unlike the other lanthanoids it has a stable higher oxidation state of +4.