John Emsley, University of Cambridge, takes you on a tour of the periodic table.

In this issue: seeing red? that will be europium

If you look at a genuine Euro note under ultraviolet light, parts of it should glow red. This light is the luminescence from a phosphor compound containing the lanthanoid metal europium, which derives its name from the same source as the banknote. Banknote counting machines can detect forgeries from the lack of this element. 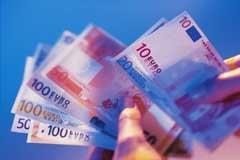 The europium story began with the element cerium, which was discovered in 1803 independently by Martin Klaproth, and by J. J. Berzelius and W. Hisinger. Then in 1839 in Sweden Carl Gustav Mosander separated two other elements from cerium - lanthanum and one he called didymium. Didymium was a recognised element for the next 45 years until in 1885 Austrian chemist Baron Carl Auer von Welsbach showed it was a mixture of praseodymium and neodymium.

However, didymium also harboured another rarer metal, samarium, which was separated by French chemist Paul-Émile Lecoq de Boisbaudran in 1879. But even his samarium was impure and in 1880 the Swiss chemist Jean Charles Galissard de Marignac extracted another rare earth metal, gadolinium, from it. Despite all this activity, samples of samarium still had unexplained lines in their atomic spectra, indicating the presence of yet another element. Eventually in Paris in 1901, French chemist Eugène-Anatole Demarçay (1852-1904) completed a painstaking sequence of crystallisations of samarium magnesium nitrate and separated another new element, which he named europium.

Europium is one of the more abundant lanthanoids and is almost twice as abundant as tin. As Eu2+ the metal can replace calcium and strontium in certain minerals, such as the calcium feldspars (calcium aluminium silicates). The commercial sources of the metal are the ores monazite and bastnäsite, which contain all the lanthanoids. The metal is not an environmental threat to plants or animals and is actually present in some plants in the 30-130 ppb range.

Europium was found in much higher concentrations than expected in samples of rock brought back from the Moon. It was present in feldspars as the reduced form (Eu2+), rather than the more normal Eu3+, showing that the minerals on the Moon were formed under highly reducing conditions. This unnaturally high abundance of europium suggests that the Earth and the Moon are not derived from a common source of cosmic material.

The main mining areas for lanthanoids are China and the US and reserves of europium are estimated to be ca  150,000 tonnes. World production of the pure metal is in excess of 100 tonnes per year, which is obtained by heating europium oxide with lanthanum metal in a tantalum crucible under vacuum conditions. The metal can also be obtained by electrolysing molten EuCl3 and NaCl using graphite electrodes.

Europium(III) phosphors, such as that used on the Euro note, emit a bright red light at 610nm. It was this property that alerted early television pioneers to the possibility of colour sets. Cathode ray tube (CRT)televisions use the phosphor yttrium oxysulfide doped with europium to provide the red colour in the picture.

As well as applications in television technology, europium has proved useful in modern lighting. Low-energy light bulbs - trichromatic lamps - produce a soft light like that of incandescent light bulbs and not as harsh as the cold glare of fluorescent tubes. Europium provides not only the red component of the spectrum, but phosphors of its lower oxidation state, such as europium(II)-doped strontium aluminate, emit in the blue range. 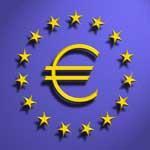 Atomic number: 63; atomic mass: 151.964; melting point: 822ºC; boiling point: 1597ºC. Europium is a soft, silvery metal and the most reactive of the rare earth metals, reacting quickly with oxygen and water. It ignites spontaneously when heated to ca 180ºC. Europium has two natural isotopes: 151Eu, which is now known to be radioactive; and 153Eu.