John Emsley, University of Cambridge, takes you on a tour of the periodic table. In this issue:Can this most vicious of elements, fluorine, be tamed?

Fluorine's name comes from the Latin fluere, meaning to flow, because the element was originally found in the mineral fluorspar (fluorite, calcium fluoride, CaF2) which melts when heated and was used in smelting and welding.

The early chemists tried to isolate fluorine from fluorspar but without success. Then in 1886 the French chemist, Henri Moissan (1852-1907) obtained fluorine as a gas, F2, by the electrolysis of a solution of potassium bifluoride (KHF2) in anhydrous HF. Fluorine gas is still produced by this method in electrolytic cells made of Monel metal, a nickel-copper alloy, which resists attack by F2.

Today fluorine is produced in bulk and transported as a liquid in containers protected by liquid air. Diluted with nitrogen, F2 is safer to handle and is used to treat the inside surface of polyethene containers, providing them with a coating of organofluoro polymer, which makes them impermeable to solvents. Fuel tanks made of such treated plastic are less likely to rupture in a crash and cause a fireball.

Fluorine is also used in the production of uranium hexafluoride (UF6), which is used to separate 235U from 238U, the former being the isotope needed for nuclear power or nuclear weapons.

The average person takes in around 3 mg of fluoride a day from water, which contains 1 ppm fluoride, and from foods and drinks, such as chicken, eggs, fish, cheese, and tea (0.4 mg per cup). Fluoride strengthens bones and teeth by converting the calcium phosphate of which they are made into the harder fluoroapatite (Ca5(PO4)3F).

Too much fluorine in the diet, however, causes fluorosis, a mottled discolouration of the teeth, and a dose of 5 g can be fatal. Fluorosis is endemic in certain parts of India, such as the Punjab, where water from wells has levels of fluoride up to 15 ppm.

Organofluorine drugs are among the most potent of drugs on the market for treating bacterial and fungal infections. The antibiotic Ofloxacin, for example, is considered to be the drug of last resort to treat life-threatening bacterial infections, while a single dose will clear up minor infections such as gonorrhea. The organofluorine drug fluconazole is effective against fungal diseases, including those which threaten patients whose immune system is impaired or suppressed following a transplant operation.

Fluorine-18 is used in positron emission tomography (PET). This short-lived isotope has a half-life of just 110 minutes and decays by emitting a positron. This immediately collides with its negative counterpart, an electron, and the two annihilate each other in a burst of intense energy. The x-ray-like radiation it emits can be used to monitor the body's vital organs. Fluorine-18 is made by bombarding oxygen-18 with protons in a cyclotron or linear accelerator and is then incorporated into a molecule like glucose which can be injected. 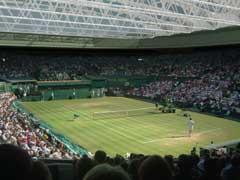 The fully-fluorinated polymer, (CF2)n, polytetrafluoroethene (PTFE or Teflon), is impervious to chemical attack and is used for cable insulation, tubing, fabric roofing, plumber's tape - and for non-stick pans. The problem of bonding PTFE to metals was solved in the 1950s by Louis Hartmann who used acid to etch microscopic holes in the metal surface before applying the polymer as an emulsion, followed by baking it at 400oC. The PTFE melts, forming a film over the surface, and some runs into the tiny etched pits, becoming wedged fast and so bonding the film to the surface.

PTFE is also the basis of Gore-Tex, the weather-proof fabric first made in 1969 by Bob Gore, who found a way of expanding PTFE by heating and stretching. This formed a membrane with tiny pores, small enough to keep water droplets out but large enough to allow sweat to escape. The new retractable roof of the centre court at Wimbledon is made from PTFE fabric. 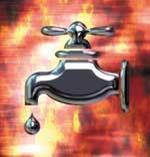 Atom number: 9; atomic weight: 18.998; melting point: -220ºC; boiling point: -188ºC. Fluorine is a pale yellow gas (F2) and the first member of Group VII (the halogens). It is the most reactive of all the elements - only the noble gases helium and neon are unaffected by it. Fluorine has one isotope, fluorine-19, which is not radioactive.