John Emsley, University of Cambridge, takes you on a tour of the periodic table. In this issue:gold - colourful in the colours it exhibits, and in its chemistry and uses 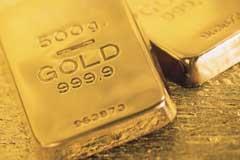 From ancient times gold has been a sign of wealth. The first pure gold coins were minted in Lydia (modern Turkey) during the rule of King Croesus, from 561-547 BC. Ancient goldsmiths created beautiful items, and Etruscan dentists, who preceded the Romans, made gold bridges for false teeth. The gold was garnered from river sediment using mercury, which was distilled off.

Over the past 500 years around 100 000 tonnes of gold have been mined from its ores - equivalent to a cube of side 17 m. In contrast, the world's oceans contain more than 10 million tonnes of gold. While some chemists tried to extract the metal from these waters, including the Nobel prize-winning chemist, Fritz Haber, all failed to do it economically. Today gold is extracted from its ores using sodium cyanide which forms a water-soluble ion, Au(CN)4-.

Traditionally gold was measured in carats - pure gold is 24 carats; 18 carat gold is 75 per cent gold and 9 carat gold is 38 per cent gold, the other metal generally being copper. Today industry prefers '990' gold which is 99 per cent gold with 1 per cent titanium, which is a tougher alloy. Pure gold is soft and malleable and one gram - the size of a grain of rice - can be beaten into a gold film covering one square metre.

Thin coatings of gold are used as lubricants in aerospace applications where there are high temperatures, high vacuum, or high radiation exposure. They have also been applied to the windows of some large buildings to reflect the heat of the Sun. Gold electroplating can produce a film microns thick which is used to coat electrical connectors and printed circuit boards, to protect their copper components and improve solderability.

Medieval alchemists were famous for their futile attempts to turn base metals into gold. However, not all their efforts were wasted. In the 13th century they found that gold would dissolve in a mixture of concentrated nitric and hydrochloric acids which they called aqua regia ('king of waters'). When this was shaken with oil of rosemary, they assumed some of gold passed into the oil, which they separated and the oil, aurum potabile, was prescribed as a cure-all.

Today gold is part of the medical armoury against rheumatoid arthritis. Gold therapy, or chrysotherapy, from the Greek word for gold, chrysos, began in 1927 when gold sodium thiomalate (myocrisin) was used to treat tuberculosis (TB). Although unsuccessful, it had a beneficial side effect - patients with arthritis had this condition held in check. Originally myocrisin had to be injected, but chemists soon developed an oral drug, auranofin (Ridaura) which is preferred.

More recently chemists have turned their attention to gold nanoparticles, discovering that they behave very differently from gold in bulk. Gold nanoparticles make superb catalysts for many reactions often with fewer byproducts, for example the conversion of alcohols into aldehydes and ketones. They are particularly good at removing traces of CO in gases by oxidising it to CO2 and are used in new type safety mask and for removing all trace of CO from the H2 used in fuel cells because this impurity ruins the electrodes.

Gold nanorods can be grown from a dilute solution of auric acid (HAuCl4) by seeding the solution with gold nanoparticles. These can be incorporated into certain monoclonal antibodies which bind preferentially to the surface of cancer cells. When exposed to near-infrared radiation the nanorods then melt and eject their atoms at high velocity, thereby destroying the cancer cell.

Gold can be many colours, depending on the metal it is alloyed with. With 10 per cent nickel, it is white, with 50 per cent copper it is red, with 54 per cent indium it is blue, with 20 per cent aluminium it is purple, with 27 per cent silver it is green, and with 25 per cent cobalt it is black. Colloidal gold forms as a brilliant purple precipitate when tin(II) chloride is added to gold dissolved in aqua regia, though it takes some time to settle out. This is used as pigment to colour glass, to which it gives a ruby glow, or to decorate porcelain, when it retains its purple colour.

Gold, which for so long had little known chemistry, is fast becoming one of the most interesting of the elements.