Sulfur is everywhere and occurs naturally as elemental sulfur, S8. It is present in some meteorites, and there appears to be a deposit of sulfur on the Moon near the crater Aristarchus. The surface of Io, one of Jupiter's moons, is covered with sulfur and spews it from active volcanoes.

There are vast deposits of sulfur on Earth, some of biological origin. The bacterium Pyrobaculum islandicum lives in hot springs and laid down vast deposits of native sulfur during the Permian and Jurassic periods between 280 and 130 billion years ago, which were once mined on a large scale.

Sulfur is part of the amino acid methionine and is an essential component of living cells. We include it in our diet from many sources such as eggs, cereals, nuts, fish and meat. Cysteine is our other sulfur-containing amino acid and is needed for the keratin of hair and nails, but our body can synthesise this. 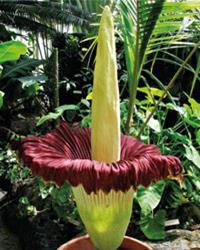 Sulfur compounds provide several rich flavours and smells, some we like, some we hate. The sulfur-containing smell from onions is propanethial S-oxide while garlic's odour comes as diallyl disulfide. At the far extreme is the titan arum lily (Amorphophallus titanium) which repels us with its emission of dimethyl disulfide and dimethyl trisulfide, described as the aroma of decaying flesh.

The human body itself can emit repulsive smells due to sulfur compounds. For example, bad breath can be caused by hydrogen sulfide, methanethiol, and dimethyl sulfide, normally produced by bacteria.

A major source of sulfur for industry is the hydrogen sulfide of natural gas, which must be removed before use. However, the smelly sulfur compound butanethiol has to be added to domestic gas to help identify leaks.

H2S is removed from natural gas by 'scrubbing' it with a solvent, such as ethanolamine, in which H2S is soluble. This is reclaimed and reacted with a measured supply of oxygen to form water and sulfur: 2H2S + O2 → 2H2O + 2S

Industrially, sulfur is converted to SO2 gas which is also a by-product of roasting metal sulfides. Most SO2 goes to making SO3, by heating it at 420°C with oxygen in the presence of a catalyst such as V2O5:

Industry also uses it in the production of chemicals as diverse as dyestuffs and detergents.

Sulfur has a rich history. The Romans burnt it in buildings to fumigate them and in wineries to prevent rogue yeasts contaminating the fermenting grape juice. Later, Byzantine ships used the secret fluid, Greek fire, as a flame thrower against enemy vessels. The Chinese also closely guarded the secret of gunpowder which was made from sulfur. Eventually it reached Europe and the monk and scientific philosopher Roger Bacon (1214-1292) discovered a way to make it from charcoal, sulfur and potassium nitrate in the ratio of 30%, 30% and 40%. Today the blend is 15%, 10% and 75%.

There are several volatile sulfur compounds in the atmosphere, the most abundant is carbon oxygen sulfide which comes mainly from swamps and resists oxidation.

Other volatiles are hydrogen sulfide, carbon disulfide, and dimethyl sulfide, which are also easily oxidised and washed out of the air. Sulfur as SO2 is emitted from volcanoes. This is now matched by SO2 emitted by human activity, mainly though burning coal and heating oil. Up to 5% of the weight of a fossil fuel may be sulfur, and coal contains the most. Over 300 million tonnes of sulfur dioxide are released to the Earth's atmosphere each year from this source.

Sulfur dioxide from power stations can be removed by 'scrubbing' the flue gases with sprays of water and neutralising the acid with lime, but this is expensive. Alternatively, the coal can be converted to synthesis gas, which is a mixture of carbon monoxide and hydrogen, leaving the sulfur behind, and these are then burned to release their energy.

One sulfur gas which enters the atmosphere becomes a permanent resident: sulfur hexafluoride, SF6. This is used in high voltage apparatus as an insulating gas because it does not break down even when exposed to electric sparks. Rather worryingly, it is a potent greenhouse gas. 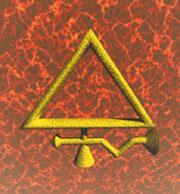