An essential element of life and lifestyle

Animals, plants, and microbes all have enzymes which require zinc. There are more than 200 enzymes which need this element to function. They regulate growth, development, digestion, fertility, and the immune system.

The average adult takes in up to 40 mg of zinc per day, depending on their liking for red meats, which have some of the highest concentrations of zinc. The minimum intake needed to avoid zinc-deficiency symptoms is 2 mg per day. However, as only around 30% of ingested zinc is absorbed, the total intake has to be around 7 mg. Strict vegetarians get their zinc from sunflower or pumpkin seeds, brewer's yeast, maple syrup and bran.

Historically, zinc compounds have played a part in the treatment of medical conditions: zinc chloride as an antiseptic, zinc oxide can stop bleeding and zinc stearate is used in skin ointments. So-called calamine lotion, which is a mixture of zinc and iron oxides, has been sold by pharmacies since the 1600s and is used to treat skin conditions. In the last century zinc oxide was used as a sun block.

Zinc oxide is added to protect rubber and plastics where it prevents damage to the polymer from heat and ultraviolet rays. It is also used a pigment in cosmetics, photocopier paper, wallpaper, and printing inks.

Zinc is primarily seen as a metal, used even as far back as Roman times. The first century writer Strabo referred to it as 'mock silver' and reported that it could be distilled and alloyed with copper to produce brass. A statuette made of almost pure zinc has been found in the province of Dacia (modern Romania). Excavations at Pompeii have uncovered a zinc-capped fountain showing that it served as a roofing material - such roofing was made mandatory in Paris in the 1860s.

However, it is almost certainly in India that zinc was first used on a large scale. Waste from a zinc smelter at Zawar, Rajasthan, testifies to this. One estimate is that more than a million tonnes of zinc were refined there in the Middle Ages. The knowledge of zinc refining spread eventually to China where it was being smelted commercially by the 1500s, and imported from there into Europe. A ship which sank off the coast of Sweden in 1745, was carrying a cargo of zinc ingots.

The German chemist Andreas Marggraf investigated the mineral calamine (zinc carbonate) in 1746 and obtained zinc by heating it with charcoal in closed retorts. He reported it as a new metal, but was unaware that three years earlier the Swedish chemist Anton von Swab had extracted zinc from zinc blende (zinc sulfide) in the same way. Also, in Bristol a zinc smelter had started up in 1743, producing about 200 tonnes of the metal per year. 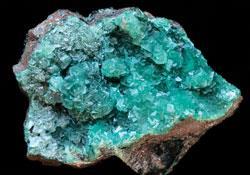 The most common ore is zinc blende which is also known as sphalerite or wurtzite. Other important zinc ores are smithsonite (zinc carbonate), and hemimorphite (zinc silicate). World production of zinc exceeds 11 million tonnes a year and commercially exploitable reserves exceed 180 million tonnes, mainly in Australia, China, and Peru.

Most zinc is used for galvanizing steel, the rest for making brass and going into die-cast components such as carburettors. Galvanizing protects steel and even when the zinc coating is breached it is the zinc which corrodes, and not the steel. Galvanized steel is used for car bodies, fences, motorway barriers, street lighting posts, suspension bridges, and roofing tacks. The steel object is either dipped into molten zinc or the zinc is applied by electrolysis. Small items like roofing tacks are galvanized by tumbling them in zinc dust at 400oC.

The main zinc alloy is brass, which consists of 33% zinc and 67% copper, but the metal is also important in 'nickel silvers' (typically 20% zinc, 60% copper and 20% nickel).The alloy Prestal (78% zinc, 22% aluminium) is almost as strong as steel but as easy to mould as plastic.