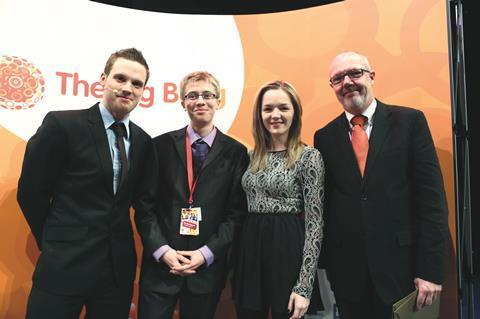 At The Big Bang in March, two very talented students were awarded the Royal Society of Chemistry Prize in the prestigious National Science and Engineering Competition. Josh Sauer and Emma Sharman won £500 each for their projects on molecular level data processing and improving diabetes treatments respectively, as well as a week’s work experience in a chemistry laboratory.

Find out in their own words what they got up to in the lab:

‘My A-level background was exclusively geared to becoming a physical scientist of some description, so I wanted to use this opportunity to open my mind to other, less familiar areas of science. I chose a biochemistry placement under the supervision of Ulrike Eggert at Kings College London. 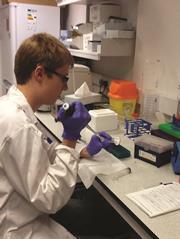 ‘Dr Eggert’s research group is interested in the chemical biology of the final step of cell division – cytokinesis. One area they are investigating is a signalling pathway, the ‘Rho pathway’, which controls cytokinesis. The group have discovered several chemicals called ‘Rhodblocks’ that disrupt this pathway so that they can see how particular proteins take part in Rho signalling during cytokinesis.

‘During my placement I was taught about ‘RNA interference’ (RNAi), a technique used by cell biologists to silence specific genes. This in turn stops the production of specific proteins. My project for the week used a screening technique designed to observe either the suppression or enhancement of the RNAi effects following treatment with the Rhoblock compounds.

‘The technique involved staining samples of fly cells so I could observe different parts of the cells fluorescing under a microscope. We concluded from the data that some of the Rhodblock derivatives were having minimal effect on cells and needed to be at a much higher concentration. To confirm our findings we also conducted the same experiment on live human cancer cells that had previously been treated with a protein that makes them fluorescent.

‘I was introduced to spinning disk confocal microscopy, which is able to take extremely high resolution pictures in different focal planes. This is then used to build up a detailed 3D ‘holograph’ of the sample. We viewed films of the cells struggling to divide and again noted that the Rhodblock derivative was having little observable effect.

‘I learnt a huge amount about chemical biology over the week and I was very humbled and honoured to have assisted Dr Eggert’s team. I greatly enjoyed learning about the complexities involved with cytokinesis and the week has opened my eyes to many fascinating and diverse research opportunities outside physical science.’

The Big Bang is the largest celebration of science, technology, engineering and maths for young people in the UK. The event brings science to life through exciting interactive exhibits, demonstrations and talks. Organisations from across the scientific spectrum give a flavour of the real scale of engineering and science in the UK. The event also hosts the finals of the National Science and Engineering Competition.

The Big Bang is the largest celebration of science, technology, engineering and maths for young people in the UK (http://www.thebigbangfair.co.uk). The event brings science to life through exciting interactive exhibits, demonstrations and talks. Organisations from across the scientific spectrum give a flavour of the real scale of engineering and science in the UK. The event also hosts the finals of the National Science and Engineering Competition. 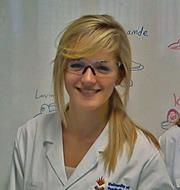 Emma’s placement was somewhere completely different: she worked with a company that is involved in manufacturing and research for large and small pharmaceutical chemistry companies across the world.

‘Onyx Scientific is a company that provides pharmaceutical chemistry services – customers provide the company with a project brief, outlining what work they would like to have completed. Some customers ask Onyx to follow a method and produce a particular substance: others want them to be involved in the development process of making new chemical compounds.

‘During my placement I was mainly based in the analytical lab where I was shown how the analytical machines work and what they are used for. The analysts use a variety of different techniques to examine chemical substances that have been sent to them by customers or that have been produced by the in-house laboratories.

‘I had the opportunity to see a Karl Fischer titrator in action – an instrument that can determine trace amounts of water in a sample. I was also shown how to service a liquid chromatography instrument. This is used to separate components in a mixture in order to identify and quantify each chemical.

‘During my week I gained a real insight into analytical chemistry in an industrial setting. I learnt how companies such as Onyx Scientific contribute towards the pioneering work of some of the largest pharmaceutical companies in the world.’

Have a go yourself!

The National Science and Engineering Competition is open to all 11–18 year old students. It rewards students who have achieved excellence in a science, technology, engineering or maths project.

The National Science and Engineering Competition is open to all 11–18 year old students. It rewards students who have achieved excellence in a science, technology, engineering or maths project (http://www.nsecuk.org).

The competition is open for entries from January to October each year. The chosen finalists are invited to showcase their work to thousands of people at The Big Bang Fair in March.

Why not give it a go?