Lots of chemistry education at #ICCE2014 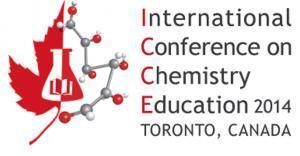 The 2014 International Conference on Chemistry Education [link no longer available] began its first full day on 14th July. Already it is proving to be an action- and information-packed meeting. Some highlights and resources from the first day of the meeting are below (list of resources at end); a full report will be posted in the coming weeks.

After a well-received talk by Nobel prize winner John Polanyi, tough choices had to be made on which of the various parallel sessions to attend. The Monday morning sessions included the themes of Research and Practice in Chemistry, Research in the Chemistry Laboratory and Online Resources in Chemistry and more. I opted to go to Peter Mahaffy's (The King's University) opening lecture on informing practice from chemistry education research, a topic of great interest and discussed before on this blog. The speaker presented an interesting approach of using research on how Grade 5 students learn (aged ~11) to address teaching methods at first year university level. Using the example of methane, he presented the traditional approach to teaching; discussing methane as an ideal gas (thus focussing on mathematical representations rather than conceptual understanding), determining molecular weight by combustion (implicitly used as a way of introducing stoichiometric analysis), and introducing models of bonding without any evidence. Based on research with Grade 5 students, he advocated an alternative model based on more authentic practice - starting with evidence and developing models to explain observations. For methane, this could be by using a mass spectroscopy visualisation to introduce atomic mass, isotopes, isotope ratios etc. Different models, each one "good enough" to explain a current observation can be utilised at any stage - this will emphasise that models are just that, and that they have strengths and limitations. A series of resources to support this approach will be freely available from the King's Centre for Visualisation in Science from August (see resources below). While on visualisations it is worthwhile looking at the PhET website, which are now being developed in HTML5, so they will work on iPads. This and other visualisation/online resources are listed below.

Learning in the laboratory

Using evidence to inform practice was a theme in the Laboratory Teaching stream of talks. Santiago Sandi-Urena (University of South Florida) presented an overview of the dearth of research on learning in the laboratory, despite its prominence in our curriculum. Work done by Marcy Towns demonstrated that less than 8% of chemistry education research papers in the decade from 2000 were on laboratory teaching. There is a need for further research on laboratory teaching, and the speaker suggested that such research should focus on the curriculum that is enacted, rather than the one documented (i.e. what happens in practice). He cited a quote from Horton in 1929: "have we any evidence that these cherished procedures do contribute to a proper goal...? "

Luckily the session continued with some good work on innovative laboratory practice. These included Kurt Winkelmann's talk (Florida Institute of Technology) on changing the introductory chemistry lab classes from expository (recipe style) to problem based. The lab classes  ran on a three week cycle: in the first week, students would complete an expository lab to become familiar with the procedure. In the second and third week, they had the option of varying an experimental parameter and investigating its effect. Winkelmann studied students' self-efficacy, and found that this increased substantially after using this method. This was especially so for female students, whose self-efficacy was initially much lower, but after the lab classes, it was the same as that observed for male students. Also in this session, Reyne Pullen (University of Tasmania) described reconfiguring introductory expository labs (e.g. measuring density) in both guided inquiry and problem-based formats. He found that students felt the workload for PBL was more acceptable than guided inquiry labs, and that the grades for both expository and PBL labs were generally higher than the equivalent guided inquiry labs. (Some self-promotion: readers interested in this approach might like our 2007 CERP paper)

Finally, with much talk about how we integrate research and practice, there was a welcome talk from Renee Cole (University of Iowa) about "propagation" as well as dissemination of innovative practice and the importance of a strategy for how the resource will be adopted by practitioners. Her work includes the development a rubric based on change theory and core principles for propagation of adopting learning resources. This can be accessed at the website listed in the resources below.

That's only a small section from one day! This is an intense conference. Lots more to go for the rest of the week.