Despite the many colours available, hair dye chemistry hasn’t changed much since the 19th century

Humans have been colouring their hair since the stone age, according to some archaeologists. The ancient Egyptians favoured black hair dye and used bolder colours from plant extracts to dye wigs made from their own shaved hair. The Romans and ancient Greeks experimented with a toxic combination of lead oxide and calcium hydroxide, and the Romans required prostitutes to dye their hair yellow to advertise their profession. 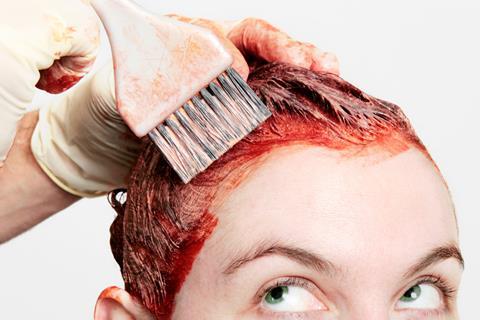 Get to the root of how dyes colour our hair

Fast forward to the middle of the 19th century and William Henry Perkin was about to discover the first synthetic dye, mauveine, which revolutionised the fashions of the time. If you liked purple, that is. Fortunately, Perkin’s chemistry professor, August Hofmann, synthesised a derivative – paraphenylenediamine (PPD) – that could be used to create other colours. PPD remains the basis of permanent hair dyes today.

Before we get to artificial hair dyes, it’s worth taking a moment to consider what gives our hair its natural colour – melanin, the same thing that gives our skin and eyes their colours. Your hair colour is determined by the ratio of two types of melanin: eumelanin and pheomelanin. If you have more eumelanin, your hair will be brown or black. Red hair contains an abundance of pheomelanin. Blonde hair is a result of low melanin levels overall.

Hair is a protein fibre, a bit like wool or silk. We can’t borrow techniques from the textile industry to colour hair for obvious practical reasons (you can’t boil your hair in acid, for instance). Instead, the first stage is to bathe the hair in ammonia, which separates the protective protein layers and allows dye chemicals to penetrate the hair shaft.

Most permanent hair dyes also contain a bleaching agent – usually hydrogen peroxide – which can now access the opened hair shaft. Here it reacts with the melanin, neutralising any natural colour. Stop here and you’ll be left with a look we’re all familiar with: peroxide blonde.

Now it’s time to introduce PPD. In the alkaline conditions provided by the ammonia, the peroxide acts as an oxidising agent, triggering a coupling reaction between two PPD molecules and a dye molecule that’s too big to escape the hair’s protein structure. Trapped here, it gives the hair a permanent brown colour; the hair’s natural hue will only appear again as it grows.

But what if we want a colour other than brown? Just introduce another molecule that will also participate in the coupling reaction and produce a different hue. It’s important to realise that neither of these coupling agents, nor PPD itself, are coloured. The colour only appears once the coupling reaction has taken place. Using different combinations of couplers produces the myriad results available at your local hair salon.

There are some health and safety concerns surrounding all this Victorian dye chemistry. Some ingredients are sensitisers, meaning that after initial exposure any subsequent contact could cause an allergic reaction or (rarely) anaphylactic shock. The EU has categorised 27 hair dye ingredients as sensitisers – 10 of which are classed as ‘extreme’.

There’s also evidence linking hair dye chemistry and cancer. The theory is that the electrophilic species created during the coupling reaction can attack human tissue and damage DNA. While studies have not established any link for those who dye only their hair at home, a minor increase in the incidence of bladder cancer was found for those who use dyes at work all day, which is why gloves are always recommended when handling them to limit exposure to the chemicals. Alternatives have been developed, like 2,5-diaminotoluene, but these are still derived from PPD, and pose similar risks.

Despite this, hair dye is big business – in a survey, 25% of the 2000 respondents said they’d spend over £18,000 on hair colouring during their lifetime. So, if you’re looking to shave a few quid, then it might be time to get the clippers out …

Watch the TikTok video to explore more in the colourful world of hair dyes.