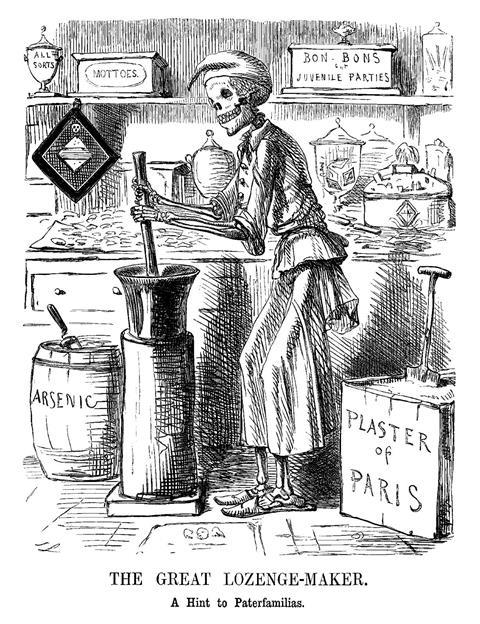 Humbug Billy was sick. At his stall in the heart of Bradford, near where Kirkgate market now stands, Billy felt like he might die. Throughout the day he’d had a steady stream of customers, all eager to buy his wonderful sweets. Now Billy wondered if someone had poisoned them.

The year was 1858 and the Bradford Sweets Poisonings had begun. By the end, some 200 people would fall ill, with 21 deaths. And it was all because of daft.

Let’s go back a moment. In the Victorian era, there were no regulations about what made up sweets – you could pretty much add whatever you liked in to the mix. As sugar was expensive, most sweet makers chose to adulterate it with daft – also known as multen, flash, or just ‘stuff’. This bulked out the sweet, was perfectly edible, and cut down costs.

You won’t find it in modern confectionary, however. Daft is powdered gypsum – calcium sulfate – better known as plaster. Today, we still use it to decorate walls. But in the Victorian era, daft was the perfect way to adulterate food and get away with it. It was hardly the worst example of Victorian food tampering either – there’s a reason sausages sold in London were known as ‘bags of mystery’.

Humbug Billy didn’t make his own sweets. Instead, he relied on a local supplier, James Appleton, who usually combined forty pounds of sugar, twelve pounds of daft, four pounds of gum and a dash of peppermint oil to make Bradford’s favourite lozenge. Appleton usually got the daft from a local druggist in Shipley and, needing to make up another batch, sent his apprentice, William Goddard, out to purchase some.

Here, tragedy struck. Goddard headed to the druggist, owned by Charles Hodgson, and asked for the daft. Hodgson, not really paying attention, directed Goddard to a cask in the attic. Goddard took the cask, returned to Appleton, and together they made up the sweets. Appleton thought they looked a little different from usual, but didn’t worry too much and sent them on to Humbug Billy. Unknown to Appleton, Goddard had taken the wrong cask. Instead of 12 pounds of daft, the sweets had been made from 12 pounds of arsenic trioxide – a white, crystalline powder that closely resembles sugar and has no odour or taste.

The first deaths, two children, occurred almost immediately, even as Billy was struck down by his mystery illness. At the time, it was thought the children had died of cholera as the symptoms of arsenic poisoning – vomiting, abdominal pains and diarrhoea – were identical. But as more people fell ill, it became clear Humbug Billy’s stall was the source. From there, the true cause was traced, and Goddard and Hodgson ended up on trial for manslaughter along with Appleton’s employer, Joseph Neal. At the trial, Felix Rimmington, a prominent analytical chemist, estimated that each humbug contained between 14 and 15 grains – just under a gram – of arsenic, three times the lethal dose. Humbug Billy – who survived – estimated he had sold enough humbugs to kill some 2000 people.

Eventually the case was withdrawn, chalked up to a genuine mistake. Yet the public outcry was a major contributing factor to the Pharmacy Act 1868, which forced pharmacies to keep a careful record of how poisons were bought, sold and stored. It was a true landmark in modern chemical safety.

So remember, when it comes to sweets – or chemical regulations – don’t be daft.