Capsaicin is responsible for the hot taste of chilli peppers. It can also relieve pain, is used in pepper spray and as a performance-enhancing drug for horses, so it certainly qualifies as a magnificent molecule 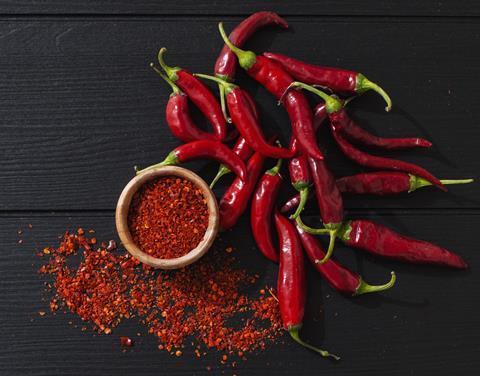 Chilli plants produce several similar chemicals called capsaicinoids, the commonest is capsaicin. When capsaicin contacts human tissue, it produces a burning feeling because the molecule binds to a protein on the surface of nerve cells that register heat. The hot sensation causes the release of pain-relieving chemicals (endorphins) in the brain. Endorphins also produce feelings of exhilaration, which may explain why some people find hot food addictive.

The Scoville scale is used to assess the ‘heat’ of chillies. Originally a test using a panel of human tasters, now high-performance liquid chromatography (HPLC) provides a numerical analysis. In the HPLC method warm ethanol is used to extract the capsaicinoids from the chilli which are then separated, identified using an ultraviolet detector, and their concentrations measured. Tabasco sauce registers from 2500–5000 on the Scoville scale and the hottest chilli ever, a Naga Jolokia, or King Cobra chilli, over one million.

Should you eat a Naga Jolokia, drinking water will do little to ease the pain. This is because capsaicin is a hydrophobic molecule, with a low solubility in water. Instead, milk is an effective calming agent since it contains casein, a fat-loving molecule which can help dissolve the fat-like capsaicin.

Capsaicin-containing creams can give pain relief from conditions such as arthritis and shingles. Meanwhile, in the show jumping competition at the last Olympics, five horses tested positive for capsaicin and were disqualified. When applied as a lotion to a horse’s legs, capsaicin acts as an irritant which causes the horse to jump higher.