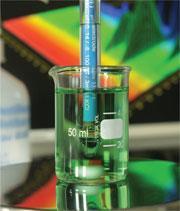 In secondary education and first year university student’s chemistry textbooks, the chapters regarding calculations of pH for either a Brønsted-Lowry weak acid or weak base solution are taught as separate topics.1–3

In essence, the pH is 7 because the acid and base characteristics of the reactants are equal to each other, for the conjugate acid and base Ka = Kb, and the production of hydroxonium and hydroxide ions is equivalent, making water via a neutralisation reaction (Equations 1–4).

This is a three step technique, which is fairly accurate, for estimating the pH of a solution where Ka and Kb are unequal. Ammonium salts were selected due to their high solubility. Transition metal ions with Brønsted-Lowry bases are insoluble to slightly soluble and there is the issue of production of transition metal hydroxide precipitates.

Looking at Equations 5–7, we can point out to students that calculating a final pH of a solution containing a Brønsted-Lowry acid and base with unequal equilibrium constants is virtually impossible. This is because there is a disproportionate production of hydroxonium or hydroxide ions that will react to produce water, leave an excess unknown amount of either H+(aq) or OH-(aq) and, in turn, shift interdependent equilibriums.

The following three step technique for estimating pH is empirically derived and requires the following constraints:

Our research demonstrated that pH readings for ammonium salt solutions with concentrations less than 0.4 M varied with the slightest temperature change from 25°C or with minimal exposure to atmospheric gases, namely carbon dioxide. We found that 0.4 M solutions at room temperature had constant pH readings after a long duration of exposure to atmospheric gases and were in compliance with readings of 0.1 M solutions at 25°C and having a nitrogen blanket. Therefore, our final research was conduction at 0.4 M, which is also a good concentration for student experimentation.

Calculate a pH value for ammonium ions by following the customary method for computing acidity of a weak acid solution while assuming ammonia’s equilibrium is unaffected by the presence of oxalate ions: 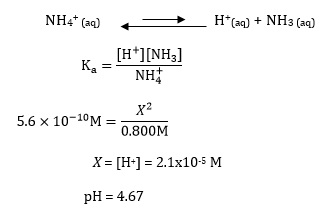 Or, using a general equation with logs, we may write: 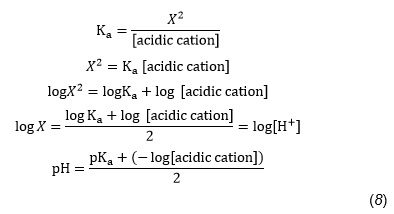 and returning to our example,

by using Equation 9, which is a modification of Equation 8,

we may now write:

Add the pH and pOH values and compare the sum to that of pKw at 25°C.

The estimated pH of the solution is 6.69 while the measured value is 6.44. Based upon the data in Table 2, the uncertainty for estimated pH has been determined to be ±0.3 pH units. Students would report their answer as 6.6 ±0.3. Table 3 lists truncated data for estimated and measured pH values. Data are truncated due to the impact of rounding logs.

The application of this simple technique is limited in application in a manner reminiscent to that of the Ideal Gas Law. Nevertheless, this approach to pH calculations is an introduction for students to the quite complex nature of equilibrium between Brønsted-Lowry acids and bases and also allows for a discussion into an area not taught in secondary education and first year university chemistry.

Manus Monroe is a lecturer in chemistry at Sonoma State University, California, US.