This is a fundamental skill required by chemistry students, principally in order to calculate the values of specified properties. As we will see, this is straightforward, but a number of obstacles do exist before students can feel confident in doing this. For example: 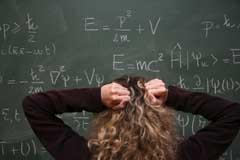 Rearranging equations can be challenging for some

It is also worth noting that by expressions we mean formulae, equations or identities.5 While these do have mathematical differences, from a chemist's point of view they can all be thought of as being any expression with an equals sign (or sense of balance) between two groups of quantities.

Zalman Usiskin5 (director of the University of Chicago Mathematics Project) gives the example:

Usiskin suggests that the number of steps required to get to this point depends on the level of student and preference of the teacher. This is essentially using the balance model1 found in many textbooks, in which both sides of an equation are treated identically. This is a powerful method that has the further advantage of being easy to remember.

Alternatively a rules-based approach can be used. This is based on the fact that when a quantity is moved from one side of an equation to the other:

My own experience suggests that many students feel more comfortable using a rule-based approach to rearrangement, even though the balance method is more logical and possibly easier to apply in more complicated situations. The two methods, however, are compatible. In both cases it is important to remember that the rules of precedence apply.

This is possibly the simplest relationship found in physical chemistry because it relates the number of degrees of freedom F, the number of components C and the number of phases P by the linear equation:

Let's suppose that we want to rearrange this to make C the subject. If we add P to both sides of this equation and subtract two we have

and would more conventionally be written as

The frequency ν and wavelength λ of electromagnetic radiation are related to its velocity c by the equation:

or written more conventionally as

In terms of a rules-based approach we would say that v moves from the top on the right-hand side of the equation to the bottom on the left.

This relationship also leads to a further example of rearrangement. The wavenumber ṽ is defined by the relationship:

The rules used in these two examples are both easily deduced from the balance approach, and it would seem to be sensible to introduce students to the rules in this way, if required.

This example contains a difference, product and quotient, as well as a logarithmic term. It gives the electromotive force E in terms of that of a cell under standard condition Eo, the gas constant R, absolute temperature T, numerical amount of charge transferred n, Faraday constant F and the reaction quotient Q as:

This will be rearranged to make lnQ the subject. The first step in doing this is to subtract Eo from each side to give

Both sides can now be multiplied by -1 to give

Both sides of this equation are now multiplied by n F/RT:

which would conventionally be written as

Note that the fact that a logarithmic term is involved in this equation is irrelevant for the manipulations. This could, however, be a source of complication for students who have failed to adopt a strategic approach.