Tips for teaching maths skills to our future chemists, by Paul Yates of Keele University. In this issue: understanding algebra

The mention of algebra often conjures up images of complicated equations with obscure symbols that require rearranging and solving. While this is undoubtedly an important aspect of physical chemistry, here I want to explore how students can extract some meaning from the algebraic symbols used in chemistry. I also want to take the opportunity to investigate a specific use of the term 'algebraic' which is used in thermochemistry.

The problem with algebra

A common, and reasonable, definition of algebra is the inclusion of symbols along with numbers in arithmetic.1 As might be expected, there is a wealth of research on the difficulties involved in understanding algebra, most of which is directed at those who are meeting the subject for the first time. However, I find chemistry students tend to have difficulties in: 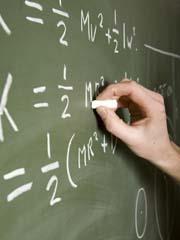 Students should be encouraged to develop 'symbol sense'

There are several ways of dealing with such difficulties. Several of these are aimed at students starting to explore algebra for the first time but which are also relevant to chemistry students.2  For example:

To these suggestions can be added:7

In chemistry the ability to interpret the meaning of symbols is often taken for granted. However, I think it is worthwhile to encourage students to spend time exploring the relationships they meet.

Possibly one of the simplest expressions met in physical chemistry is:

which is recognisable as being equal to the change in Gibbs free energy, ΔG. This immediately introduces terminology over and above that found in mathematical algebra courses, namely that:

There is some irony here in that we have introduced a technique of algebra in using the symbol x to represent a general quantity. Algebraic terminology is also being extended in that we have the 'compound symbols' x1 and x2; the concept that 1 and 2 denote initial and final states respectively is another source of confusion. It is important to stress that x1 represents a single physical quantity, as does x2. In fact, for some students this may be a generalisation too far and it may be easier to write directly:

where the meanings of H1, H2, S1 and S 2 are explained directly. The original expression then becomes:

The ability to remove and insert brackets in algebraic expressions is critical. In this case we have an example of the distributive law, though it is perhaps not essential to name this explicitly. Its application gives:

Note that two negatives are being multiplied to give a positive final term. One could now group the positive and negative terms to give:

and insert brackets to rewrite as:

Such a result would logically be followed by a discussion of why it is of little use, because the term in each bracket consists of quantities from a mixture of physical states. In this way the context of the algebra within the reality of chemistry is maintained.

Encouraging students to 'play' with algebraic expressions in this way, and to question the meanings of the symbols they meet, may help them to become more proficient and confident in areas of chemistry which rely heavily on algebraic representation.

An example of the explicit mention of algebra within chemistry is found frequently in a statement of Hess' Law of heat summation, ie when a reaction can be expressed as the algebraic sum of two or more reactions, the heat of reaction is the algebraic sum of the heats of these reactions.8 Here the 'heat of reaction' would more correctly be termed the enthalpy of reaction. The term 'algebraic sum' simply means that we add the quantities, taking account of their signs. This is in contrast to the arithmetic sum where the signs would be ignored. The statement of Hess' Law also requires us to extend our understanding of algebraic manipulations. As we have seen,3 mathematicians combine numbers and scientists combine physical quantities, but here we are combining chemical equations using algebraic concepts.

Enthalpy changes for the following reactions are as shown:9

Using these data, we can use Hess' Law to determine the enthalpy change ΔH3 for the reaction:

We first need to determine how equations (i) and (ii) can be added algebraically to give equation (i ii). Notice that in this type of problem labelling each equation from the outset makes life much easier; we have also labelled the corresponding enthalpy changes as ΔH1 etc.

Consider what happens when we reverse equation (ii). We obtain:

In algebraic terms, this can be thought of as taking the negative of equation (ii), or -(ii). If we now divide this throughout by two we obtain:

which is the required equation (iii). Since this is equivalent to (i) - 0.5 (ii) in terms of equations, the corresponding enthalpy change is found by combining the individual enthalpy changes in the same way. Therefore:

since the two negatives in the second term combine to give a positive. The final computation then gives: