A day in the life of a development chemist: Morven McAlpine

Morven McAlpine has spent the past two years working for ICI Imagedata as a development chemist. She talks to James Berressem about her typical day 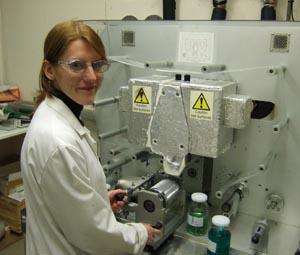 Based in Brantham, Essex, ICI Imagedata manufacture consumables used in digital printing. These products include the media printer manufacturers use in their machines to produce photographic quality images in less than a minute. Working in the R&D department, which comprises 10 staff, Morven and a colleague are the team responsible for developing coatings used on media for printing images on plastic cards, eg driving licences, gym memberships etc. The media, a ribbon of film which carries the coatings, is fed across high-temperature printing heads. Dyes contained within the coatings are released and diffuse directly into the plastic card. This process is called dye diffusion thermal transfer.

Morven manages several projects at a time so her day-to-day work depends on what stage a project is at. For a project a customer may want a new coating to speed up their printing process, or to print onto a different material, or to include new features, such as a security image, in the printed product. Morven's challenge is to understand the problem and then find a way of getting the right materials into coatings which might work.

Morven spends much of her day working in the lab, formulating and testing new coatings. She prepares each formulation, which is a mixture of chemicals such as polymers, dyes, fillers, lubricants etc, on a small scale by first dissolving a polymer in a solvent and then mixing in the required additives. Morven tests each formulation by putting the coating onto a film ribbon to produce test prints on a printer. She analyses the image quality of these prints. If the coating is meant to leave a protective film too, she will assess the gloss finish and test the prints for their resistance to abrasion. Morven also checks how the ribbon film is performing during the print process, ie  does it keep its shape, leave any debris on the printing heads etc? She records data from her tests, along with the coating's make-up, and writes reports on her analyses in the company database. This allows Morven and her colleagues to review the progress of each project and coordinate their work effectively.

Having identified a promising formulation Morven uses small-scale machinery similar to that in the ICI Imagedata factory to pilot the coating's manufacture. Using customer feedback on samples of the new product, she continues to refine the formulation, and thus the coating's properties, until it is ready to be made in the factory. At this development stage securing patents on new coatings is an important task for Morven. She contacts lawyers by e-mail to check that ICI Imagedata can make its new formulation and secure the intellectual property rights on the product. When a formulation goes into production Morven may find herself on the factory floor for an afternoon working with the manufacturing team to ensure the new formulation transfers smoothly to full-scale production.

Morven is happy that she is using her chemistry-specific training at work. She enjoys the problem-solving nature of her job and that projects can move quickly from ideas and formulations, through testing, to scale-up and production - projects can run for two-three months to a year or more. She takes particular satisfaction in seeing her work on a formulation lead to a product made in the factory.

2002-05, PhD in chemistry on polymer clay nanocomposites, University of Strathclyde