A-level reform - where are we now?

The RSC's position and developments so far 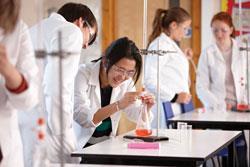 Readers in the UK will no doubt have heard the views of Michael Gove, secretary of state for education, on the future and purpose of A-levels. In a recent letter to Ofqual (the regulator of qualifications, examinations and assessments in England), Mr Gove said, 'There is clear dissatisfaction among leading university academics about the preparation of A-level pupils for advanced studies.' This is a subject about which the RSC has campaigned, both independently and with SCORE (a collaboration with the Institute of Physics, Society of Biology, Association of Science Education and the Royal Society).

Over the last year, the RSC, with SCORE, has taken a very proactive approach to A-level reform. In May, we convened a meeting that involved representatives of all UK universities offering courses in the chemical sciences, teachers, educationalists and members in industry, to discuss how the broad chemical sciences community wanted to engage in the reform process. The outcome was a proposal that learned societies should convene National Subject Committees to oversee the development of subject criteria and assessment guidelines. Similar proposals came from the biology and physics communities. Subsequently, with SCORE, we met with Ofqual, the Department for Education (DfE), exam boards and all the university 'mission groups', to discuss the concerns of the science subject communities and to propose the National Subject Committee solution. There seemed to be general consensus that subject committees would need to be established.

In his letter to Ofqual, Mr Gove went on to say, 'It is of paramount importance that new A-levels command the respect of leading universities. I am delighted that the Russell Group is planning to create an organisation to provide advice to Ofqual on the content of A-levels. The advisory body will focus on those A-levels which are most commonly required for entry to our leading universities and will seek the views of universities outside of the Russell Group, as well as engaging with relevant learned societies and others.'

This is not quite what any of the learned societies were hoping for, but in subsequent interactions with Ministers and DfE civil servants we were encouraged to engage with the Russell Group to develop the role of the RSC and the subject community in the reform process. Indeed, we have been told that government would like to secure a wide engagement across the sector, including expertise from learned societies and that our support, and that of our members, will be critical in implementing the reforms.

It is unfortunate, then, that our most recent understanding is that the Russell Group are considering a proposal to set up an organisation that would provide advice on desirable A-Level subject content, and that, currently, such an organisation would not reflect the views of other stakeholders or, play a part in A-level assessment.

We are extremely concerned about this development:

Additionally, the reformed A-levels are expected to be ready for first teaching for the extremely ambitious target of September 2015. This is in parallel to the national curriculum and GCSE reforms, which are also scheduled for September 2015. The potential for creating avoidable problems is obvious: work on the reformed A-level having to assume the starting knowledge before the end point of reformed GCSEs has been specified; students beginning A-level studies in 2015 will have been taught using the current GCSE curricula, while those starting in 2017, will have been taught by the reformed GCSE curricula. All this could be avoided by reforming the A-levels after the GCSEs.

I, along with Peter Main at the Institute of Physics, have written to the under-secretary of state, Elizabeth Truss, to express our deep concern about the on-going lack of engagement with the subject communities as represented by the learned societies.

We will keep you informed of our progress.

Jim Iley is the RSC's executive director for science and education.