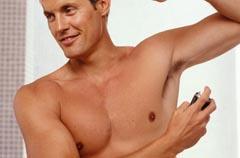 Antiperspirant gels and roll-ons are a part of most people's daily hygiene regime. The active agents in these products are aluminium and zirconium salts, which block underarm sweat glands by reacting with water to form a sticky gel of aluminium hydroxide or zirconium hydroxide which plugs the pores. We know this is how they work because these tiny plugs have been observed by transmission electron microscopy.

The first commercial antiperspirant was Everdry, launched in 1902 in the US. Dabbed under the armpits using cotton wool, Everdry irritated the skin and rotted clothes because it contained acidic aluminium chloride hexahydrate. In 1934 Arid, developed by US chemist John H. Wallace, came on the market. This contained aluminium sulfate, which was less acidic than the chloride salt. Later, in 1947, two chemists, T. Gorett and M. G. deNavarre, experimented with 'basic' aluminium chloride, which is made by replacing most of the chloride with hydroxide ions. These chlorohydrate antiperspirants were even less acidic than previous products. In 1978 Nathan Brown of Unilever found a way to incorporate the salts as microfine particles, which became the basis of Sure antiperspirant.

Aluminium chlorohydrate was soon to be replaced by zirconium chlorohydrate. Although zirconium is more expensive, it appeared preferable to aluminium, which was increasingly being linked with Alzheimer's disease. (Aluminium was detected in the protein deposits that slowly clog up the brains of those people with this terrible condition.) All possible sources of aluminium contamination became suspect, which included antiperspirants.

However, in the 1990s the re-analysis of brain samples from Alzheimer's victims showed aluminium was not always present - the 20-year scare had been based on faulty chemical analysis. (Aluminium is in fact well tolerated by the human body, which is not surprising considering it is an abundant part of the natural environment, being one of the main constituents of clays and soil.)