The International Union of Pure and Applied Chemistry (Iupac) have published a new table of atomic weights, which has changed some values for the first time in history. 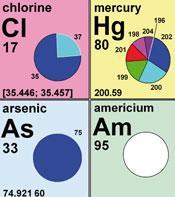 Instead of a standard value that is an average of the stable isotopes of an element, the new Table of Standard Atomic Weights contains 10 elements with their weights expressed as intervals to reflect the natural variation in atomic weight.

The new table has been produced in cooperation between the US Geological Survey (USGS), Iupac and other contributing institutions and the new weight intervals are designed to reflect the more accurate measurements of atomic mass are now available. The 10 elements affected are hydrogen, lithium, boron, carbon, nitrogen, oxygen, silicon, sulfur, chlorine and thallium.

Tyler Coplen, director of the USGS's Stable Isotope Laboratory in Virginia, said that although this change offers significant benefits to the understanding, he admitted that although the change could be a 'challenge' to teachers and students. However, the changes should only become relevant at the point at which isotopic variation is a familiar topic: for example instead of a standard weight of 10.811, boron will now be shown to have a weight between 10.806 and 10.821, echoing how it's weight can vary depending upon location.

Iupac hope to publish a new periodic table this year, as part of the International Year of Chemistry, that will show the atomic weights as intervals.