Long gone are the days of a summer break where the biggest health risks were stepping in donkey droppings on the beach or being sick on a fairground ride. These days, trips abroad provide the traveller with a whole range of diseases. What's our defence? 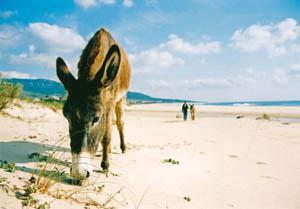 Our first line of defence against many of these diseases is our immune system. Unfortunately, the immune system is not perfect and cannot always mount an effective attack on invading viruses and bacteria. This is where vaccination comes into play. 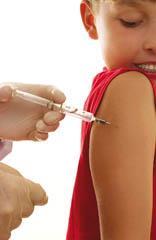 Have jab, will travel

Vaccines were discovered by Edward Jenner in the late 18th century. They are based on the idea that the immune system can be stimulated by components of a pathogen - ie the virus or bacterium. Proteins or protein fragments (antigens) produced by pathogens alert white blood cells to their presence, which then engulf the pathogen and destroy it. The cells also start to produce Y-shaped protein molecules (antibodies). The tips of the Y match the antigens produced by invaders like a lock to a key.

The antibodies travel through the blood stream and every time they bump into an antigen that they recognise, they lock on to it. This labels the pathogen for attack by other white blood cells which see the antibody signal and digest the invaders or infected body cells. The immune system retains the chemical blueprints for making the same antibodies for the next encounter. This is why if you survive diseases such as chicken pox you are unlikely to catch it again in adulthood.

Vaccination tricks the immune system into thinking a pathogen is attacking by using dead or a deactivated version of the virus or bacterium. The white blood cells respond, creating antibodies against the antigens but without you having to catch the disease first. The blueprints for the antibodies are stored chemically ready for a real invasion of the disease. You have to administer a different vaccine for each disease you might encounter and if you are travelling in the Tropics or the developing world there are several diseases you need protection against.

Among the diseases for which a vaccine is available is diphtheria. This highly infectious disease is caused by the bacterium Corynebacterium diphtheriae, which affects the upper respiratory tract. Symptoms include a severe sore throat and fever which is followed by the formation of a lethal sticky coating in the nose and throat. The bacteria also release a toxic molecule into the blood - a chain of 535 amino acids, which penetrates cells and kills them.

In the 19th century scientists discovered a serum that neutralises the diphtheria toxin. This 'antitoxin' is made by extracting antibodies and other molecules from the blood of horses that have been vaccinated against diphtheria. To work, the potion has to be administered as soon as symptoms appear because it cannot undo the damage caused by toxin that has already entered body tissues.

During the past 10 years, scientists have been trying to find drugs that can kill the diphtheria bacterium. Researchers at Brandeis University in the US discovered the switch that starts production of diphtheria toxin, a protein called DtxR. They have determined the exact atom-by-atom structure of this protein and medicinal chemists are now looking for compounds that can deactivate the switch before the toxin is released and so save the lives of diphtheria victims.

Another serious illness you may encounter when travelling the globe is hepatitis B. It is caused by the hepadnavirus but the source in half of all cases is not known. However, sexual transmission, needle sharing among drug users, having a tattoo and transmission from mother to unborn child cause the other half of cases. The virus incorporates itself into the DNA of liver cells, leading to chronic liver damage and potentially liver cancer. Vaccination before exposure provides lifelong protection.

Researchers have also discovered antiviral drugs to treat hepatitis B. These drugs resemble the nucleotide molecules that act as the natural building blocks of viral DNA (the virus' genetic code). The fake building blocks have unreactive fluoro groups instead of hydrogen atoms at strategic positions. So, once the virus starts to use these fake molecules the duplication mechanism is jammed. Viral replication is significantly slowed down, giving the immune system a chance to overwhelm the disease.

Viral-DNA is prone to damage, or mutations (changes). Most mutations stop the virus working but occasionally one will benefit the virus. If the mutation changes the virus so that it ignores the fake building block, for example, then the antiviral drug will fail and the virus continues to replicate, passing on the mutant genes (DNA fragments) to its offspring.

Some strains of hepatitis have already evolved such resistance to antiviral drugs, so scientists are desperately trying to discover replacements that might work together to defeat viral resistance. 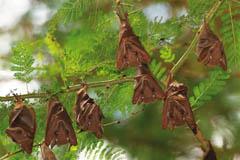 Rabies will send you batty

If you are bitten by a dog or other mammal - eg bats - when travelling, the wound may be the least of your worries. Rabies, another viral disease, is a possibility. Its name derives from the same Latin word which means madness or rage, and it causes water-fearing, foaming at the mouth, and swelling of the victim's brain which leads to death. Louis Pasteur and Emile Roux developed a vaccine in 1885 for rabies, but it only works if given before symptoms appear.

In 2006, scientists in Brazil investigated the potential of a group of natural plant compounds, phenolics, as antiviral drugs to treat rabies. They discovered that just three of a range of compounds tested had antiviral activity. The structures of these compounds - 3,4,5-trimethoxybenzoic acid, 3,4,5-trimethoxyacetophenone, and 3,4,5-trimethoxybenzoic acid ethyl ester - could provide a starting point for designing more effective compounds against rabies. However, any potential drug would have to go through safety tests and clinical trials before it could be used in medicine, which might take up to 10 years. In the meantime, vaccination is the only defence, that and avoiding rabid animals.

The disease that killed Alexander the Great, typhoid fever is alive and well across the globe. The Salmonella typhi bacterium multiplies in the blood and spreads by ingestion of food or water contaminated with infected faeces. The bacterium causes a high fever, headache, aching muscles, and death in severe cases.

Previously, antibiotics, such as ampicillin and chloramphenicol, were the standard treatment and saved many lives. However, like so many other diseases, typhoid evolved resistance, particularly in India and South East Asia. Vaccination if you're travelling in affected areas is therefore essential.

Tuberculosis, or TB, is now carried by a third of the world's population. This is a bacterial infection and as with viruses the bacterial DNA, its genetic code, is susceptible to mutations that can help it to evolve resistance to antibiotics. This has already happened in many parts of the developing world and among certain sections of society such as the homeless, drug users, and HIV sufferers.

However, the issue of resistance is more complicated than it at first appears. A study published in March 2007 in the Journal of Infectious Diseases suggests that most cases of drug-resistant TB may be due to new infections rather than acquired resistance to the antibiotics. If this research is confirmed it might help scientists devise a new strategy for stopping the spread of this disease.

Malaria currently kills up to three million people each year. The disease is caused by the Plasmodium parasite carried by infected mosquitoes. The parasites are carried into a person's bloodstream by a bite from an infected mosquito, they then multiply in the liver and the blood causing a lethal fever.

There is no vaccine against malaria, but there are drugs that protect you from infection. Plasmodium, like many viruses and bacteria, has also evolved resistance to some of these drugs. However, a relatively new drug derived from Chinese medicine, known as qinghaosu - the principal ingredient from the herb Artemisia annua - works well in treating the disease and so far has staved off resistance.

There is a great deal of research being done to find novel drugs to defeat malaria. Scientists at the Toronto General Research Institute and Ontario Cancer Institute recently, for instance, discovered a synthetic compound - called KP-15, it is a 6-iodourinidine 5-monophosphate compound - that targets and kills malaria parasites, including one drug-resistant strain. In January 2007, researchers at Northwestern University in the US worked out how the parasite tricks red blood cells into engulfing it and so perpetuating its life cycle. New drugs aimed at blocking this process might beat malaria.

Today, most of the diseases we have discussed are confined to the developing world where they pose an enormous public health problem and one that usually affects privileged Westerners only when they travel to such places. However, as the climate changes some of these could spread to the developed world. Unless we can halt global warming, the time may come when you could catch some of these diseases just by staying at home. Stepping in donkey droppings will then be the least of your worries.