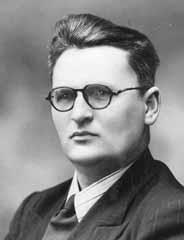 The school of chemistry at Bangor University has been awarded a Royal Society of Chemistry (RSC) National Chemical Landmark in recognition of the work done by Professor Edward (Ted) Hughes on the kinetics and mechanisms in organic chemistry during the period of 1943-48. The award coincides with the school's own 125-year celebrations of chemistry at Bangor.

Professor Merfyn Jones, vice-chancellor of the university accepted a commemorative blue plaque from Professor David Philips, RSC president-elect, at a ceremony at the university's main PJ Hall in October. In presenting the award, Professor Philips said, 'it is entirely appropriate to give this award in memory of Ted Hughes. Hughes collaborated closely with Christopher Ingold for many years and provided Ingold with reactions and data on which he was able to make some of his mechanistic predictions on nucleophilic substitution and elimination reactions'. Indeed Hughes and Ingold together introduced the terminology of SN1, SN2, E1 and E2 to organic chemistry in the mid-1930s, which was underpinned by myriad carefully planned reactions done by Hughes.

Hughes was a prominent figure in the 125-year history of the department. Born in Criccieth, Gwynedd in
north Wales, he obtained a first class honours degree in chemistry at Bangor University. He also did his PhD in the department (Ingold was his external examiner) and later in 1943, after a stint in Ingold's group at University College London (UCL), became chair of chemistry at Bangor.

Hughes is remembered for developing a method for isolating isotopically-enriched water from natural water by continuous fractional distillation. He used the 18O-enriched water to trace the fate of particular O atoms in a substrate molecule undergoing a reaction, thus elucidating the mechanism of the reaction.

The National Chemical Landmark scheme is part of the RSC's initiative to recognise major achievements in the chemical sciences and bring them to the public's attention. Launched in 2001, there are currently 29 such prestigious landmarks in the UK.