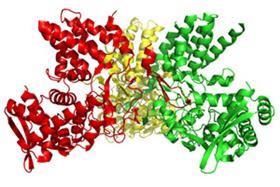 The influenza A nucleoprotein

Influenza A viruses, which include common flu and avian influenza, have a long protein tail. Now, US scientists have obtained an atom-by-atom crystallographic structure of this component, which could provide a new target for antiviral drugs to tackle the disease.1

Jane Tao and colleagues at Rice University in Houston, working with Robert Krug's team at the University of Texas at Austin, used X-ray crystallography to show that even small changes in the structure of the long, flexible tail of the influenza virus' nucleoprotein will prevent the virus from replicating.

The influenza A nucleoprotein comprises approximately 500 amino acids with 30 of those contained in the tail loop. Using gel filtration chromatography to analyse the effect of altering the tail loop's make-up, the researchers found that a mutation in only one residue out of 30 was enough to prevent the nucleoproteins coming together to form the building blocks required for the virus to make copies and infect other cells.

'There is a small binding pocket for the tail loop of the protein that appears to be a promising target for a new class of antiviral drugs', explains Tao. 'We know from previous genetic studies that this tail loop is almost identical across strains of influenza A, so drugs that target the tail have a high potential of being effective against multiple strains, including the H5N1 [bird flu] strains'. New antiviral drugs capable of defending us from strains of influenza A resistant to current drugs, such as Tamiflu and Relenza, will become crucial weapons in efforts to stop a potential flu pandemic.