Negishi, Suzuki and Heck were honoured for their pioneering work on palladium catalysis, David Bradley reports

The 2010 Nobel Prize in Chemistry was awarded jointly to Richard Heck of the University of Delaware, Newark, Ei-ichi Negishi of Purdue University, West Lafayette, Indiana, USA, and Akira Suzuki of Hokkaido University, in Sapporo, Japan, for their pioneering work on palladium-catalysed cross-couplings in organic synthesis. This seemingly innocuous phrase belies the power of a process that allows chemists to join carbon atom to carbon atom and to quickly build complex organic molecules.

Carbon atoms are uniquely promiscuous in their ability to react with other elements giving rise to an incredibly diverse range of molecules throughout nature from the simplest methane to the proteins from which living things are composed and the nucleic acids that provide the genetic instructions for making those proteins. In between lie millions of natural products and synthetic compounds from ethanol and aspirin to chlorofluorocarbons and polyvinyl chloride. Carbon is the building block on which life on Earth is built and the building block of many of the materials on which we depend.

Despite the incredible molecular diversity of natural carbon compounds and the ability of chemists to build novel organic materials, carbon atoms are relatively stable entities and do not tend to react with each other. Forming carbon-carbon bonds with a view to building up a sophisticated organic chemical is a tricky process. Early efforts used methods to make carbon more reactive, which is perfect for building a small number of organic compounds, but that increased reactivity makes it difficult to produce sophisticated molecules with different functional groups because the reactivity takes the carbon atoms down different pathways leading to by-products and low yields of the desired substance.

Catalysts provide the answer by lowering the activation energy of a reaction and allowing otherwise stable chemicals to connect on a much shorter timescale than is otherwise possible. In the 1950s the German chemical company, Wacker Chemie AG, used the noble metal palladium as a catalyst to help it transform ethylene, a petrochemical feedstock material, into acetaldehyde, which is a precursor for plasticisers, acetic acid and many other useful chemicals.

The interest of Richard Heck was piqued by the notion of using palladium more widely. He began experimenting with different reaction conditions and his successful results culminated in a series of scientific papers published in 1968 in which he showed that it was relatively straightforward to link a ring of carbon atoms to a shorter fragment of carbons to make styrene, the monomer used to make polystyrene. The styrene synthesis was just one of several palladium-catalysed reactions, which became known generally as the Heck reaction, which share a common feature in creating single bonds between carbon atoms. 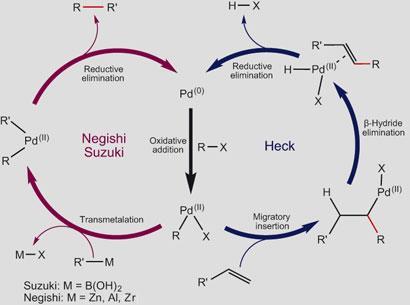 The Heck reaction involves the reaction of an unsaturated halide or triflate with an electron-deficient alkene (such as an acrylate ester or an acrylonitrile) and a base and the organopalladium catalyst (eg the catalyst can be tetrakis(triphenylphosphine)palladium(0), palladium chloride or palladium(II) acetate), to form a substituted alkene. Today, the Heck reaction is used to manufacture the anti-inflammatory drug naproxen, the asthma drug montelukast and the painkiller morphine.

In 1971, Japanese chemist Tsutomu Mizoroki extended Heck's work and that of Shiichiro Teranishi (1969) to coupling between iodobenzene and styrene to form stilbene. His research is recognised in the fact that the Heck reaction is often known as the Mizoroki-Heck reaction.

The second joint winner of this year's Nobel chemistry prize is Purdue's Ei-ichi Negishi. In 1977, he developed a variation on the well-known Grignard reagent. The Grignard reagent is based on magnesium and boosts carbon's reactivity but is highly sensitive to water, even to the humidity of the laboratory. Nevertheless, it is useful in some circumstances for coupling together carbon atoms. Negishi reasoned that a zinc-based version of the Grignard reagent would not be so sensitive to water but suffer from lowered carbon reactivity. This reduced reactivity could then be overcome by using it in conjunction with a palladium catalyst.

Two years on, Akira Suzuki turned to boron, which is the mildest activator for carbon coupling but is non-toxic - a major benefit for large-scale manufacture. Suzuki's version of carbon-carbon coupling is, for instance, used in the commercial production of thousands of tonnes of the agricultural fungicide, Boscalid.

Palladium cross-coupling reactions developed by this year's winners have been used in the syntheses of countless medicinal compounds, including the anticancer drug Taxol, originally identified in the bark of the Pacific yew tree, and the novel drug lead discodermolide, a toxin found in a Caribbean marine sponge, as well as plastics and many other materials. Researchers have even used the method to functionalise graphene, a carbon allotrope which earned its developers, this year's Prize in Physics.