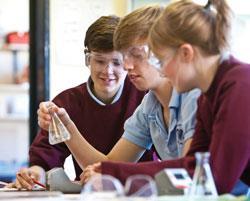 According to new research by academics at the University of York, more pupils do physics and chemistry after the age of 16 in schools which provide a more comprehensive range of careers supervision and advice. The study, led by Professor Judith Bennett of the University's Department of Education, was commissioned by the AstraZeneca Science Teaching Trust.

The research revealed that schools which had a higher take-up of physics and chemistry were those that set up science-based work placements with local employers - and allowed pupils a significant say in their choice of placement.

The researchers compared the take-up of physics and chemistry in four pairs of secondary schools across England in rural, semi-rural and urban locations. They included six comprehensives and two all-girl grammar schools.

Using the National Pupil Database, the research team identified schools with similar characteristics including both 11-16 and 11-18 schools. They examined the average performance across all GCSE sciences and the average numbers going on to take A-levels as well as the proportion of those doing physics and chemistry.

'We wanted to look at factors that influenced pupils' decisions including particular features of the schools. The strongest message to come out is that take-up of physics and chemistry is greater where careers advice and guidance is more comprehensive,' said Judith Bennett.

'We found take-up was better where teachers were more heavily involved in careers advice and guidance and where pupils were able to experience science-based work placements. Pupils also appreciated being involved in the selection of their work placement.

'Schools with a high uptake were well networked with local employers and arranged for people working in the area of science to come in and talk to pupils. Pupils were also encouraged to set up science-based societies in school.'