Chemistry in the limelight 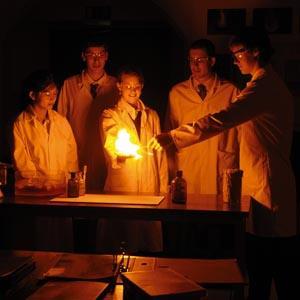 The thermite reaction, screaming jelly babies in molten KClO and a steaming, foaming turd - the catalytic decomposition of H2O2 using a KI catalyst - were some of the favourite spectacular demonstrations that chemistry staff chose to perform for 40 local primary school children at Blundell's School's Chemistry Week event, Blundell's favourites. Education in Chemistry's exhibition chemist Adrian Guy thrilled the audience with a variation on the demo described on page 12 of this issue, which involved igniting ca 0.2g of guncotton on the palm of a volunteer's hand. The rapid burn is such that hardly any heat is felt on the hand - and a bucket of cold water is kept nearby just in case.