Research done at Sandia National Laboratories in Albuquerque, New Mexico, US, hints at a new way to make petrol using nothing more than sunshine and thin air 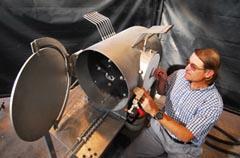 Research done at Sandia National Laboratories in Albuquerque, New Mexico, US, hints at a new way to make petrol using nothing more than sunshine and thin air. Sandia scientist Rich Diver is hoping to carry out the reverse of combustion using solar energy to 're-energise' chemically carbon dioxide from the atmosphere into carbon monoxide, which can then be reacted with water to generate a precursor, in the form of methanol, for liquid combustible fuels.

The prototype device, the counter rotating ring receiver reactor recuperator (CR5, for short), will break a carbon-oxygen bond in the carbon dioxide to form carbon monoxide and oxygen in two distinct steps. Originally, the device was designed to split water into hydrogen and oxygen, to supply the fuel of the so-called hydrogen economy. However, the Sandia researchers figured that the same technology could be used to split carbon dioxide similarly. They have now demonstrated proof of principle and are currently building a prototype.

Ellen Stechel, manager of Sandia's Fuels and Energy Transitions Department, says that researchers have known for a long time that it might be possible theoretically to recycle carbon dioxide as a fuel, but sceptics suggested it would be technically or economically unviable. 'It has not been pursued with much vigour', she says. 'Not only did we think it was possible, the team has developed a prototype that they fully anticipate will successfully break down carbon dioxide in a clever and viable two-step process'.

The invention is, however, probably 15 to 20 years away from marketability. Nevertheless it holds real promise for reducing atmospheric carbon dioxide levels as well as providing a renewable fuel source. 'Recycling carbon dioxide into fuels provides an attractive alternative to burying it', adds Diver. 'What's exciting about this invention is that it will result in fossil fuels being used at least twice, meaning less carbon dioxide being put into the atmosphere and a reduction of the rate that fossil fuels are pulled out of the ground'.

The prospect of a liquid fuel is significant because it fits in with the current petrol and oil infrastructure. After the synthesised fuel is made from the carbon monoxide, it could be transported through a pipeline or put in a truck and hauled to a fuelling station, just like petrol refined from petroleum is now. Plus it would work in ordinary petrol and diesel engine vehicles.