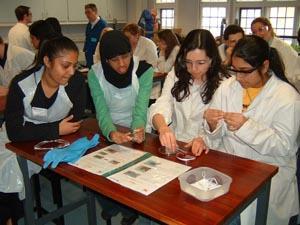 Source: Chemistry: the next generation

A group of researchers from the universities of Stirling, Strathclyde, Dundee and the Institute of Education, London, have studied the effects of cooperative learning on science attainment, attitudes towards science and social skills during the period of transition from primary to secondary school.1 The project was done in two stages.

The first stage involved 10-12-year old pupils from 24 experimental classes in primary schools in Scotland. The classes covered group work skills, such as listening, questioning, helping, giving explanations and reaching agreement and two group projects - one on evaporation and condensation, and one on forces.

The researchers tested the pupils' understanding of the topics before and after the project and compared the results with a control group of pupils. They found significant gains in science attainment by the experimental classes as well as improvements in their behaviour as the project progressed. The quality of pupil-pupil interactions improved among the experimental class.

The second stage of the project looked at the extent to which the skills and knowledge could be retained when the pupils transferred to a secondary school. The researchers tested the pupils, now aged 12-13, on one of the original topics, forces, and on science topics not used in the primary project. They also ran an 'attitude to science' test and a sociometric test. They compared their results against a control group of pupils of similar age and background.

The researchers found there was no significant difference between the scores of the two groups on the test concerned with non-project topics, indicating that the groups were of comparable ability. However, the experimental class scored higher than the control group in the forces test , suggesting that they had retained their knowledge. Also pupils in the experimental class generally had a more positive attitude to science and were more adept at establishing peer relationships than the control sample.