A rapid route to synthesise graphene capsules has been developed by researchers in the US and Korea. The capsules can be nano-engineered on demand and show promise in oil absorption. 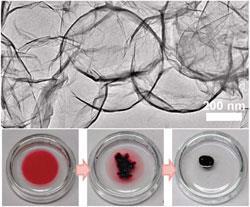 Hollow spheres of graphene or graphene oxide (GO) have previously been made, but usually via complicated routes that involve the assembly of GO sheets onto template particles and then a separate template removal step. Now, a team led by Jiaxing Huang at Northwestern University and HeeDong Jang at the Korea Institute of Geoscience and Mineral Resources has developed a quick new route to synthesise graphene capsules in just one step.

The scientists use a technique called aerosol spray pyrolysis to make their nanocapsules. They spray aerosol droplets containing GO sheets and a polystyrene template into a furnace. As the mixture enters the furnace the liquid rapidly evaporates, forcing the flexible GO sheets to mould to the template surface. Simultaneously, the GO is reduced and the template is burnt away creating graphene capsules in a single step.

Dan Li, an expert in graphene based materials at Monash University, Australia, says that 'this work presents a beautiful demonstration that the chemical behaviour of graphene-derived macromolecules is unique, which could lead to new powerful methods for synthesis of functional materials'.

Huang and Jang show that the graphene capsules have a high free volume and promising oil absorption properties, but they suggest that this is just the beginning. 'One advantage of the spray pyrolysis method is that one can incorporate multiple components into the aerosol droplets to serve different purposes,' say the researchers in their paper, adding that this makes the technique 'a very convenient tool for on demand engineering of the structures and properties of the resulting particles'.

Recovering homogeneous catalysts at the end of a chemical reaction can be tricky as the catalysts are in the same phase as the products. But scientists in Canada have now found a way to do this that doesn't suffer from the slow reaction rates that affect current catalyst recovery systems.

Currently, catalyst recovery systems in use in industry rely on an aqueous/organic mixture. The catalyst is dissolved in the aqueous phase and the reagents are in the organic phase. The problem with this, though, is that because the catalyst and reagents only meet at the interface between the two, the reaction is slow.

Philip Jessop and colleagues at Queen's University, Ontario, have come up with a solvent system that switches from a single phase for a quick reaction to two phases for quick and easy separation.

The team tested their system on a homogeneous catalytic reaction. First, they carried out the reaction in a one-phase switchable water/organic solvent mix and then switched the water's properties to get two phases - one holding the product and the other holding the catalyst. 'Switchable water is a CO2-switchable solvent - its physical properties can be changed by applying or removing CO2,'  explains Sean Mercer from Jessop's group.

The switchable water solvent mix comprises water and a tertiary amine base, resulting in water free from salts. Introducing CO2 leads to the formation of salts (carbonic acid forms in the water and protonates the amine base, generating charged species or salts), forcing out the organic solvent. The product, which is in the organic solvent, can then be removed, leaving behind the catalyst, which stays in the water. Removing the CO2 by heating and flushing with air causes the charged species to revert back to their original uncharged form, making the water salt-free once more. 'Fresh reagents and organic solvent can then be added and the reaction can be run again and again,' says Mercer.

'Others have done this in a slightly different way, in which the originally hydrophobic catalyst switches into water on passing CO2, but Jessop's "switchable water" approach has the advantage that he can use simple water soluble ligands that can be bought off the shelf, whilst the ligand switching requires specially designed ligands that are difficult to make,' says David Cole-Hamilton, an expert in homogeneous catalysis at the University of St Andrews, UK. However, he does point out that there are still problems to be addressed, including a fall off in conversion after several cycles, which he says can almost certainly be fixed by improved reactor and recycler design and by the rigorous exclusion of air.

Another issue, adds Mercer, is that they perform the catalysis in a highly basic medium, so certain reactions can't be performed. 'We also need to enlarge the number of reactions that can be performed using this solvent system, as we only demonstrated the hydroformylation of alkenes to aldehydes,' he says. 'A second issue is we sometimes observe slight leaching of our precious metal catalyst into the organic phase so it is lost from the process. In the immediate future, we need to find catalysts that leach less, or move to less expensive metals so that losses aren't as detrimental monetarily.'

Have you ever wondered what the green pigment sometimes seen in bacon is? A team of US scientists did and have determined the structure of this 'nitrite burn'.

Nitrite, which is produced naturally in the body, has been used to preserve meat for centuries. It is essential for preventing botulism and also gives the cured meat its characteristic colour and flavour. In addition, its reaction with myoglobin is thought to produce the green pigment often seen on the meat.

Some people are concerned about whether this nitrite burn - and indeed nitrite itself - has any health implications. For instance, some fear that a similar reaction between nitrite and human haemoglobin could lead to blue baby syndrome, a disease whereby nitrite in the blood decreases haemoglobin's ability to carry oxygen (although this is usually caused by nitrites in groundwater, rather than food). However, little is known about its interactions with the body. 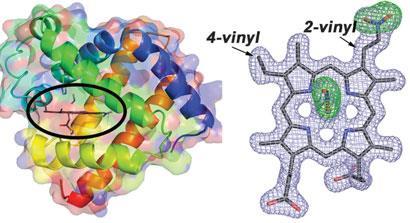 George Richter-Addo and his group at the University of Oklahoma have taken an important step in understanding nitrite's interaction with haem compounds by fully characterising the structure of nitrite burn using single crystal x-ray diffraction. Most significantly, they found that nitration occurs at the 2-vinyl group of the haem macrocycle, but not the 4-vinyl, which is attributed to steric factors.

'This is the first step to understanding the chemical function of this [nitrite burn],' explains Richter-Addo. 'Knowing the structure gives us very good hints on where we should proceed with looking at how it will react with other constituents present in the body.'

Scott Bohle, an expert in chemical biology at McGill University in Montreal, Canada, says that the work answers a lot of questions. 'The specificity is surprising,' he says. 'I find it interesting that the nitration occurs out here [on the vinyl moiety].' He also feels that there should now be more investigations in physiological conditions, and not just in the solid state.

Richter-Addo and is teams are now looking to investigate if nitrite burn affects the physiological function of myoglobin and whether there are other human proteins that are affected by nitrite.

Shining a light on fingerprint detection 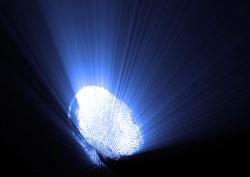 The fingerprints were enhanced by aggregation induced emission of tetraphenylethene

Scientists in China have discovered a method for visualising latent fingerprints found at the scene of a crime, which they say is very simple, rapid, does not require professional forensic treatment and does not destroy the print.

Bin Su and co-workers from Zhejiang University, Hangzhou, noticed that the conjugated compound tetraphenylethene (TPE) adhered to the greasy ridges of fingerprints via a hydrophobic interaction. TPE is non-fluorescent in acetonitrile solution, but when light with a 365nm wavelength is shone onto the solution, the compound can lose the extra energy by rotating. However, when TPE sticks to the fingerprint, its molecules clump together (or aggregate). The aggregated molecules can no longer rotate, so instead, they release the energy as light. This phenomenon is known as aggregation induced emission (AIE) and has been used in sensors, but never as a means of detecting fingerprints.

The group stumbled on the result by accident. 'We were trying to enhance the visualisation of latent fingerprints by electrochemiluminescence,' says Su, 'and we found that the chemical procedure of aggregation induced emission was one of the methods for adsorbing TPE onto fingerprint ridges.'

Steven Bell, an expert in forensic research at Queen's University in Belfast, UK, is circumspect in his assessment of the protocol. 'The advantages over existing methods still need to be demonstrated,' he says. 'A side-by-side comparison against the standard superglue fuming method would be useful to establish the sensitivity.' This is a method in which superglue reacts with amino acids, fatty acids and proteins in latent fingerprints and moisture in the air to produce a white material along the ridges of the fingerprint, resulting in an image of the fingerprint.

He adds that getting the fingerprints into the dye solution at the scene of a crime may not be easy. 'There may be practical difficulties in applying this method where the object bearing the marks is large - a car for example.'

Although Su thinks that an AIE protocol is promising for future forensic applications, he does recognise some of its limitations. However, he thinks the protocol could at least have educational value. If appropriate compounds can be found with 'solubility in alcohol and emission in the visible range, the protocol might be suitable as a chemistry or forensic experiment for school students,' he says.