A look at recent chemical science 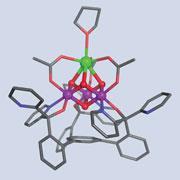 The first model of photosystem (PS) II - a key part of the biological machinery that drives photosynthesis - has been constructed. The manganese and calcium cluster model reveals in unprecedented detail how PS II turns water into oxygen, a discovery that could lead to the creation of efficient catalysts for producing clean fuels.

The oxygen evolving complex (OEC) at the heart of the PS II protein is where water is split using the power of the sun. It is the most important part of PS II, but is difficult to study accurately. Huge strings of protein surround the complex, making it tricky to observe directly and previous attempts to synthesise PS II's core have been hampered by the formation of complex mixtures of products.

Now, Theodor Agapie from the California Institute of Technology, US, and colleagues have made a model of PS II's catalytic centre by making a simple, but large, ligand which surrounds the cluster with bridging alkoxides.

This allowed them to synthesise two isostructural cubic complexes. The metal atoms in the first complex are all manganese, but in the second - the best model of the OEC yet - one manganese is replaced by a calcium ion.

Splitting water is no easy task. The consensus is that light provides the energy to oxidise the manganese atoms in the PS II cluster and this supplies the necessary redox power. 'Those oxidised species are hard to get to,' explains Agapie, 'but it seems that when you have a calcium there it's just much easier to get to that trimanganese +4 species.' In fact, redox potentials of the complexes with and without calcium differ by a huge margin. 'We think that's because the calcium is essentially stuck - it's not redox active - and so you can localise the higher oxidation state on the manganese,' says Agapie.

'I think it's very cute, the concept of substituting in a low valent, non-redox active cation [into the cluster],' says Tom Mallouk from Pennsylvania State University, US, who works on the problem of water splitting using nanoscale catalysts.

Normally the electrostatic environment around a metal centre is controlled by coordinating ligands, so to see nature using cations to do that may be an important insight. Mallouk says that 'many of the most active catalysts [for water splitting] have low valent, alkaline metals present in them and no one has really known why. This work sheds some light on why that might be.'

Intriguingly, Agapie says their cluster does not appear to show any catalytic activity. He suggests this might be because the acetate ligands do not dissociate readily enough to reveal a binding site for water, and so tweaking the design could help. The natural OEC cluster includes an extra manganese atom known as the 'dangling manganese' as it sits slightly apart from the rest of the complex. The absence of an equivalent atom in Agapie's model is also a potential explanation for the catalytic inactivity.

Chemists have made an artificial polymerase that doesn't need a metal catalyst or organic solvents and is more efficient than current approaches inspired by biology. The new 'enzyme' is made from a dimer of two doughnut shaped cyclodextrin molecules - short circular sugar polymers. One cyclodextrin catalyses the reaction and the other holds the growing polymer string in place.

Akira Harada, at Osaka University, Japan, and colleagues wanted to create a synthetic polymerase that would be efficient and also environmentally friendly - unlike polymerisation processes currently used by the chemical industry. They decided to investigate cyclodextrin molecules as a polymerisation catalyst because cyclodextrin molecules have been used as catalysts before. 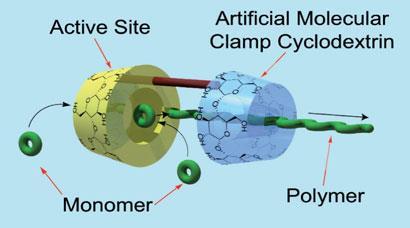 'While we were investigating the preparation of polyesters using cyclodextrins (CDs) as catalysts, we found that CD plays roles not only as a catalyst but also as a kind of chaperone protein,' says Harada.

To capitalise on this effect, Harada decided to make CD dimers before realising he'd inadvertently copied a working system from nature - DNA polymerase. 'We found in a biochemistry textbook ring polymers (clamp proteins) that are similar to our system. DNA polymerases have clamp proteins and the DNA polymerisation reaction does not take place without the clamp.'

Harada explains that his CD clamp helps the process by threading onto the growing chain, increasing the polymer's molecular weight and slowly pulling the growing polymer from the active site. This opens up the reactive site for the next monomer, which then adds to the growing polymer. Because of this cooperation the polymerisation takes place without any solvents, making the process much greener. ' Harada's latest work really does have some fairly profound implications for both conventional polymerisation and DNA propagation,' says Peter Cragg, an expert on using macrocycles as artificial enzymes at the University of Brighton, UK. He describes the system as 'highly reminiscent' of DNA polymerase enzymes. 'We believe that this process is applicable for any polymer synthesis,' says Harada, who now hopes to test this claim in the lab.