Do maths grades add up?

Students with anything short of an A* grade in GCSE mathematics will struggle to read a degree in chemistry. And even those students with an A-level in mathematics are likely to need some help to translate their maths skills to chemistry-based problems. 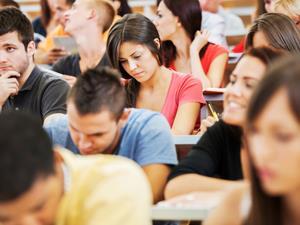 Students are likely to struggle studying Chemistry at university level

These were the main conclusions of a two-part investigation by Bristol University chemist Dudley Shallcross and Gerry Walton, head of mathematics at Rednock Comprehensive School in Dursley, Gloucestershire. The research was supported by the Royal Society of Chemistry (RSC)-led initiative, Chemistry for our future (CFOF), funded by the Higher Education Funding Council for England (HEFCE). The findings provide insight into what each grade at GCSE and A-level maths means in terms of the mathematical knowledge and skills of students entering a chemistry degree, and importantly lead to recommendations for the maths provision in UK chemistry departments.

Not a new problem

Over the past 15 years the majority of university chemistry departments have changed their admissions criteria to accept students onto their courses without an A-level in mathematics. The change came about partly in response to the declining numbers of students choosing to study chemistry in the early 1990s, and partly because of the growing culture of widening participation in higher education, which encourages chemistry departments to make their courses accessible to a wider cohort.

Against this scenario, there have been changes to the way mathematics is taught and assessed in schools and colleges. According to Shallcross, academics need to be aware of these changes if they are to equip their students with the right tools for getting the most out of the mathematically demanding physical chemistry units. 'There has been a shift in grade boundaries between GCSE and the O-level', he said, 'there is a difference in mathematical knowledge between a student with a C at O-level and C at GCSE'.

What's in a grade?

Shallcross and Walton scrutinised the schemes of work in mathematics at both GCSE and A-level from the three main awarding bodies, prior to 2000 and post-2000. They particularly wanted to find out whether these students would cope with the introductory maths course (1S) given to Bristol chemists without A-level maths, which has been running for the past 14 years.

In a report, published in New Directions (2007, 3, 73), they conclude that only students with an A* at GCSE are likely to make the transition with success. These students have good algebraic skills and can manipulate formulae easily. They are mathematically very capable and, though calculus would be unfamiliar to them, they could acquire these tools with a bit of help. They make the point, however, that these students will not have studied the subject for at least two years, three if they take a gap year, and may be rusty on the detail.

Students who gain a grade A at GCSE maths will be competent but not intuitive mathematicians. Often, the report finds, students can gain a grade A through sheer hard work - with coursework playing a critical part - but they are approaching the limitations of their mathematical ability. They will have reasonable algebraic skills but may struggle with the detail required by the later stages of the 1S course. Students with a grade B or C would find any university chemistry course involving an aspect of mathematics daunting.

An A grade at AS-level, the researchers find, indicates a candidate with good all round algebraic skills, able to tackle new concepts quickly. They will be familiar with differentiation and integration, but only at an early level. Students with a grade C at AS are likely to have less well developed algebraic skills, and will have picked up most of their marks from the applied units. They have no depth to their calculus knowledge and are likely to struggle with a mathematically demanding course. A student with D/E at this level will struggle even more.

Students with a grade A at A-level maths are strong mathematicians - they are particularly good at algebra and calculus. Grade B and C students will be competent mathematicians, but they are likely to find more advanced trigonometry and integrations requiring substitutions at the upper ends of their ability. Students with a D/E at A-level could quickly find themselves outside their 'comfort zones' in physical and theoretical chemistry courses.

A comparison between the mathematics specification and standards in Scotland revealed that the Scottish Higher was slightly above the AS-level. The Scottish Advanced Mathematics course includes most aspects of the A-level but also incorporates elements of the further maths course. In short, a candidate successful at the Scottish Advanced Higher would comfortably meet the demands of the Bristol chemistry course, but Scottish Higher students would need to broaden their depth of knowledge.

According to Shallcross there is a lot of variation in the maths provision in UK chemistry departments. The majority run their own maths courses. There are courses aimed specifically at students with weak mathematical ability, such as the 1S course in his own department and the 'drop in centre' run by the maths department at Plymouth University. And some courses, such as the web-based course at Manchester University, are aimed at all incoming chemistry students, regardless of their maths qualifications.

The in-house courses tend to be context-based and are more successful than those run externally. 'In the 1S course, we try to bring students up to A-level standard only in those topics they are likely to encounter in their chemistry courses. The chemistry applications provide the students with the motivation to study the maths', Shallcross explained. There is evidence, he said, that the students on this course outperform their peers who have A-level maths in physical chemistry. Whether this is down to the context-led approach of the 1S course, or because A-level maths post-2000 covers a wider range of topics and so students spend less time on the core skills, such as calculus and algebra, that are required by chemists, is not totally clear. Moreover, said Shallcross, the 'modularisation' of A-level maths is not conducive to students remembering and carrying through skills to their university course. They have long enough - up to three years in some cases - to forget what they've learnt.

'The bottom line', says Shallcross, 'is that we need to spend time with first- and second-year chemistry students, regardless of their maths qualification, working through a raft of problems that are mathematical in nature but related to chemistry so that they can see and make the connections. After all, it will be their ability not only to do practical laboratory work but also to solve numerical problems that will make them so desirable to employees in many diverse applications'.