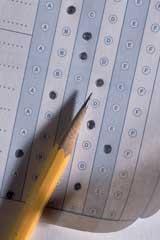 Several new science GCSE papers have been rejected by Ofqual because it judged the standards they demanded of pupils to be too low. Following their earlier judgement of the 2007 and 2008 science and additional science GCSE papers as giving 'serious cause for concern', England's exam regulator has also reviewed the 2009 and 2010 papers.

The watchdog found that in many instances the papers demanded too low a level of knowledge and understanding. Edexcel and OCR boards were singled out for particular criticism. Ofqual reported that 'in OCR Science A Unit 1, the chemistry questions were judged to be of low demand and did not provide the necessary stretch and challenge for the highest-ability candidates.'

Draft exams that have been submitted to Ofqual for accreditation have also been rejected by the watchdog. Richard Pike, chief executive of the Royal Society of Chemistry has seen these proposed science exams and describes them as 'plummeting new depths in dumbing down'. In a higher tier paper submitted by Edexcel and intended for 2013 Dr Pike reports that the most difficult calculation involved adding one to 100 and that the most highly rewarded questions required solely narrative answers. 'The scientific content [of the questions] was minimal', Dr Pike explained, 'and general knowledge would have been sufficient' to answer the questions.

Dr Pike has since been interviewed in The Times newspaper (21st July 2010) about his views on these findings, where he voiced concern that politicians, exam boards and schools all had a vested interest in keeping standards low. Quoted in the article, Dr Pike said that there is 'political expedience to get as many children to get as many GCSEs at C and above as possible.'

This news comes after Dr Pike wrote to the Secretary of State for Education Michael Gove in June, highlighting concerns about the development of the new science GCSEs that will first be taught from 2011. Dr Pike urged Mr Gove to delay the GCSEs to allow further development time to ensure that the new GCSEs 'deliver the criteria aims and learning objectives'. In addition, Dr Pike conveyed his willingness to work with the Secretary of Education and appropriate bodies to resolve these issues and further develop the new GCSEs, something that he repeated in his recent Times interview. Going further, Dr Pike is quoted as saying 'a new relationship must be established with universities and industry, which have been left out of the curriculum development and assessment process. This is not a broken system that has to be fixed - it is a corrupted edifice that must be razed to the ground and rebuilt.'

Chair of Ofqual Kathleen Tattersall resigned in July, saying that it was 'in the best interests both of government and the education sector for Ofqual to have a new chair.' Ofqual was formed in 2008 from the separation of the Qualifications and Curriculum Agency. The government has announced that the QCDA, the curriculum agency, will be scrapped but Mr Gove has suggested that Ofqual will remain, albeit in a reformed manner. Chief executive Isabel Nisbet will head Ofqual with support from the deputy chair, Dame Sandra Burslem, until a new chair is appointed.