In May, scientists working in Wales mixed with Welsh National Assembly ministers to discuss the role science in Wales can play in addressing the future energy challenge. Now in its third year, the Science and Assembly 2007 meeting was held at the Wales Millennium Centre and the Senedd in Cardiff Bay. The event was organised by the Royal Society of Chemistry's (RSC) parliamentary affairs officer Dr Stephen Benn, in cooperation with the Institute of Physics, the Institute of Biology, the Campaign for Science and Engineering, the BioSciences Federation and the Science Council. 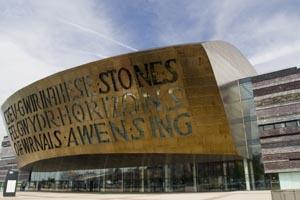 In an opening address RSC chief executive Dr Richard Pike pointed out that the chemical sciences have a major role to play in ensuring future demand for energy is met while environmental concerns such as climate change are addressed. Research in the chemical sciences, he said, will help realise new technologies with important applications, from exploiting renewable energy resources, through converting them into power and electricity which can be stored and supplied efficiently, to waste management technologies such as carbon capture and storage.

According to Professor Stuart Irvine of the University of Wales, Bangor, solar energy harnessed by photovoltaic (PV) cells will be an important part of the mix of solutions to solve the future energy challenge. Wales already hosts two of the three main manufacturers of PV products in the UK. Collaborative research initiatives such as the Bangor-led PV SuperGen project, which aims to reduce the cost of solar energy by developing new thin film PV materials, mean that Wales is set to lead the way in the UK's photovoltaic industry. 'The aim is to have 10 per cent of Wales' power requirement supplied by PV technology by 2020', said Irvine.

Research at the Cardiff School of Engineering into the co-firing of coal and biomass is focusing on improving the performance of power stations and reducing their CO2 emissions. Professor Phil Bowen and colleagues at Cardiff hope that a better understanding of the combustion process and research into biomass materials will mean that, in the future, up to 20 per cent of the fuel used in power stations is renewable.

There are also opportunities to exploit marine renewable energy technology for Wales and the UK. Ian Masters of the University of Wales, Swansea explained that underwater turbines positioned in the tidal streams around the UK's coastlines could provide a predictable and reliable source of electricity.