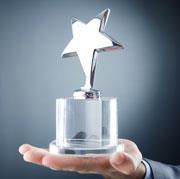 In July, the winners of Planet SciCast were announced at an awards ceremony at the Royal Institution in London hosted by BBC The One Show' s technology reporter, Marty Johnson. The National Endowment for Science, Technology and the Arts (NESTA)-funded competition has been running for the last three years.

This year the competition attracted over 160 films in total, including 41 films categorised as chemistry. The films had to be short, original and depict fascinating scientific facts or demonstrations in a unique way and the winning chemistry film was The squeaky pop test, by pupils from Parkside Federation Schools in Cambridge. The film shows how hydrogen gas - produced by placing a magnesium ribbon in hydrochloric acid - can power a rocket.

Inspired by children's programming like Johnny Ball's Think of a number, and How and How 2, former television producer Jonathan Sanderson suggested that pupils could make their own programmes to inspire others. The original aim was to get children and young people to learn about film making and excite them about science, however teachers parents and science/engineering/technology professionals can also get involved and make short films about practical science.

Anyone can rate and comment on the videos, which are hosted online under Creative Commons, but the entries were judged by a celebrity panel including former commissioner of science programmes for Channel 4 Louisa Bolch and Dr Iain Stewart who has presented several television series about geoscience. Mark Miodownik, lecturer in materials science at Kings College London and EPSRC Senior Media Fellow represented chemistry on the judging panel. In total there were 16 awards and the overall Best Film 2010 (also winner of the Award for Technical & Artistic Achievement 2010) was Gravity, mass and weight by 17 year old Oliver Madgwick, who explained the difference between weight and mass with a Lego stop motion animation film about the moon landings.

You can view the winning videos, and all the other entries on the SciCast website.