Forest School are top of the bench

A team from Forest School, Essex, won this year's RSC Top of the Bench competition

A team from Forest School, Essex, won this year's RSC Top of the Bench competition, held at Imperial College, London on 2 April 2011. The competition was jointly organised by the Royal Society of Chemistry and Imperial College and tested students' knowledge of chemistry through written and practical exercises.

Jack Aitken, Noah Mawhinney, John Morris and Anthony Graff were presented with the Frank Halliwell Trophy by Oscar Ces from Imperial College. The winning team members each received gift tokens and £500 for their school to spend on scientific equipment. 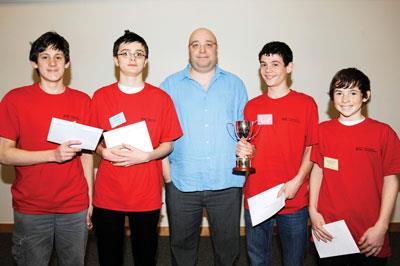 The winning team from Forest School, Essex, with Oscar Ces from Imperial College

The runners-up were Max Bowling, John Pilgrim, Simon Bennett and Dylan Mistry from Nottingham High School. This year's Jacqui Clee Award for the most outstanding contribution to the competition was awarded to Hannah Niesser from St Gerard's School Trust.

Entry forms for the 2012 event will be sent to all RSC Local Section secretaries in September. For more information about entering next year's competition, contact the RSC education team.