Boys twice as likely as girls to aspire to work in science, RSC poll shows 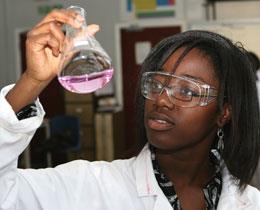 In January, the Royal Society of Chemistry (RSC) published a poll, carried out by Ipsos MORI on behalf of the RSC, on teenager's attitudes towards science. The poll canvassed the opinions of over 500 teenagers aged 11-16 from around the UK and found that more teenagers wanted to work in a scientific environment than any other option. However, when split by gender, it showed that fewer girls wanted to work in science than in a zoo, a tv studio or a classroom.

The poll also asked how much, if at all, the teenagers had been persuaded to study science by their parents, teachers and friends. These answers were almost exactly the same for girls and boys, which suggests that this gender bias is coming from somewhere other than the classroom or home.

Professor Carole Perry, chair of Heads of Chemistry UK and a member of the RSC Council, said: 'These survey results show a great equalisation in classrooms. Not too long ago there was a clear bias against encouraging girls to study science, but thankfully that bias appears to have been eliminated.' However, she asked 'who else is altering the aspirations of these girls?'