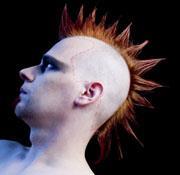 The global market for hair dyes exceeds £4 billion annually with the biggest manufacturer, L'Oréal taking just over a third of world sales. Hair dyes are of three kinds: temporary, semi-permanent, and permanent. The first of these are easily washed out of the hair, the second will survive several washings but eventually fade, and the third are locked fast within the hair shaft and disappear only as the hair grows out.

The temporary dyes were originally developed for dyeing textiles, and they can be applied as rinses, gels, mousses, and sprays. They coat only the surface of the hair and are washed away the next time the hair is shampooed. A typical temporary hair dye is FD&C Blue No 1. (FD&C refers to the US Federal Food, Drugs, and Cosmetics Act.) This is a large molecule so it cannot penetrate into the hair fibres, and it has three negatively charged benzenesulfonate groups which make it highly water soluble so it is easily washed off.

Semi-permanent dyes are smaller molecules which can pass through the outer layer of the hair (the cuticle), and move into the inner cortex, there to remain until they are washed away. Typical semi-permanent dyes are 2-nitro-1,4-diamino-benzene, (orange/red), 2-amino-4-nitrophenol (yellow), 1,4-diaminoanthraquinone (violet), and 1,4,5,8-tetra-aminoanthraquinone (blue), and a combination of these will produce the desired shade.

Permanent hair dye formulations do two things: they lighten the colour of the hair and then dye it, with the dye molecules being formed within the hair shaft where they remain trapped. For this to happen the strands of hair must admit the necessary chemicals, which they can be induced to do by adding ammonia. This causes the hair shaft to swell by raising the pH to about 10, and this opens the cuticle scales. Once inside the hair, the components react together to form the dye molecules which are too large to escape when the scales close again on drying.

Permanent hair colorants come as two separate gels which have to be mixed together before application. One contains hydrogen peroxide, the other contains the chemicals that form the dye. These are para-phenylenediamine (1,4-diaminobenzene), commonly referred to as PPD, plus a so-called coupler molecule; of themselves both these molecules are colourless.

When the gel paste is first applied the H2O2 bleaches the hair, but after ca 30 minutes the process that forms the dye kicks in. The H2O2 oxidises PPD by removing hydrogen atoms from amine groups, which then react with the coupler molecules to form much larger molecules that have the necessary intensely coloured chromophore groups with nitrogen double bonds. There may be several couplers in a hair dye. For example in L'Oréal's dye 'Havana', 4-amino-phenol, 4-amino-2-hydroxy-methylbenzene, and 3-amino-phenol together generate a soft auburn shade.

An epidemiological study by the University of Southern California School of Medicine caused alarm in 2002 by linking PPD to bladder cancer.

However, in 2003 another study was undertaken by the Kaolinska Institute of Sweden which specifically looked at the incidence of all types of cancer in Swedish hairdressers, the group that was expected to be most at risk. The medical records of 38,800 women and 6800 men were consulted, stretching back for 40 years, but the results suggest that they were no more likely to get cancer than the rest of the population.

John Emsley is a popular science writer based in the department of chemistry at Cambridge University.