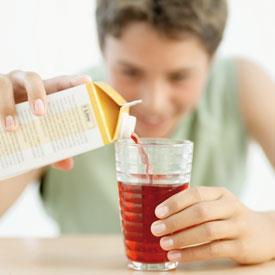 A berry fruit juice blend that could lower the risk of cardiovascular disease has been created by scientists in France.

Polyphenols are found in foods as diverse as red wine, dark chocolate and green tea. Their beneficial effect on health is well known, with a diet rich in polyphenols correlating with a reduced risk of cardiovascular disease. This is because polyphenols increase the release of vasodilators (compounds that dilate blood vessels), such as nitric oxide, from endothelial cells that line the interior surface of blood vessels. 'Abnormality of this function is observed in most types of cardiovascular disease, such as hypertension, atherosclerosis and diabetes,' says Valérie Schini-Kerth, who led the team at the University of Strasbourg.

Wishing to promote a healthier option than alcohol or chocolate, the team worked with the Eckes-Granini Group of Neider-Olm, a fruit drink producer in Germany, to develop and test a variety of different fruit juice blends. Different fruits contain different polyphenols, which are often bitter tasting. For example, grapes contain a large amount of procyanidins, and anthocyanins give berries their dark red colour. The blends were tested for taste and their effect on the vasodilation of pig arteries in vitro.

The team found that the most effective blend with the least bitter flavour consisted of a base of grape juice (63 per cent), blended with apple, blueberry, strawberry, lingonberry, acerola and aronia. This blend did not have the highest overall polyphenol level, but the team saw that this particular fruit combination caused a greater increase in vasodilation than other blends. Schini-Kerth advises: 'Most of the juices you can buy in a supermarket have a very low level of biological activity. Buying fruit juices that provide something extra is an important message for consumers.'

Cristina Andrés-Lacueva, an expert in polyphenol bioactivity at the University of Barcelona, Spain, points out that the polyphenol profile of each blend was not tested so it could differ from that of the component fruits. She adds that 'the next step could be clinical in vivo studies with animals or humans'.

'The benefit to the cardiovascular system of a regular intake of such a fruit juice over a long period of time remains to be determined,' says Schini-Kerth.