There are growing concerns that colony collapse disorder (CCD), which is ravaging honeybee populations, could be due partly to pesticide use. 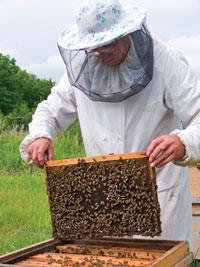 Honeybees are critical in the pollination of countless food crop plants on which humanity depends. Various factors including climate change, ecosystem loss, viruses and fungi have been blamed for CCD over the last decade or so. However, CCD has existed at least as long as humans have used honeybees.

Mounting evidence suggests that neonicotinoid pesticides may be changing bee behaviour, perhaps in conjunction with other factors. The net result seems to be that bee larvae are not fed adequately and the hive fails to thrive.

Neonicotinoids are analogues of natural products found in tobacco leaves that kill pest insects. They have proved much more effective at targeting pests than previous 'bee friendly' pesticides without, apparently, being directly harmful to bees.

The debate regarding the causes of CCD has been confused because of claims of a cover-up by the manufacturer of the most commonly used neonicotinoids as well as leaked documents from the Environmental Protection Agency in the US that make allegations against the company.

The issue of whether or not a pathogen, such as fungus or virus, is to blame in CCD is also moot. The team that most recently demonstrated a connection between CCD and a microbial fungus is supported financially by the same manufacturer, albeit not on the CCD research.