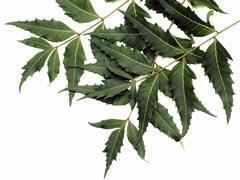 Over the past two decades Professor Steven Ley of Cambridge University and his colleagues have been on a chemical odyssey. They have endeavoured to find a way to make a natural insecticide, originally extracted from the Indian neem tree in 1968. Finally, thanks to the efforts of 40 PhD chemistry students and many others they have found a way to synthesise azadirachtin in 64 individual chemical reaction steps.1

With no tooth nor claw, plants often turn to chemical weapons to defend themselves against insect attack. Azadirachtin is one such natural chemical weapon. The natural product occurs in the neem tree, or Indian lilac (Azadiracta indica) and inhibits the development of insect larvae among a wide range of destructive insects. It is harmless to mammals and does not affect beneficial insects, such as bees and ladybirds. Understanding the chemistry of azadirachtin could improve our understanding not only of insect behaviour but may also lead to simpler and stable analogues that might be used as safe, naturally derived insecticides in agriculture. 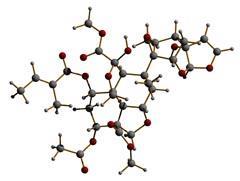 The structure of azadirachtin was determined in 1985, after a long, intensive research effort. But achieving this synthetic target was to prove an exceptional challenge. The difficulties in devising a total synthesis stems partly from the 16 chiral centres in the molecule - carbon atoms to which different chemical groups can be attached in mirror image arrangements. Those coupled with the complex pattern of oxygen-containing groups, the molecule's complex conformation and its chemical reactivity and light sensitivity, all conspired against chemists for decades.

'While we have been working on this complex synthesis', says Ley, 'we have also developed a number of new methods that are of general use for the construction of other important molecules'. The key steps in making the molecule involved a Claisen rearrangement and a novel radical cyclisation reaction.