Stephen Ashworth has recently returned from taking chemistry, including the award winning workshop Kitchen Chemistry, to schools and learners in South Africa 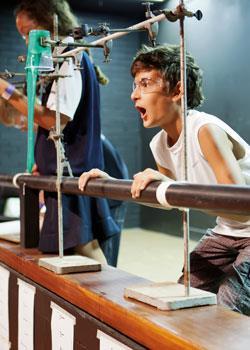 Scifest Africa Director, Anja Fourie, said 'Shows and workshops such as Kitchen Chemistry are vitally important for areas of South Africa where resources and educator support are poorest. It brings chemistry to life for learners, some of whom may otherwise only ever have learned chemistry in theory, and provides an awareness of the role of chemistry in our everyday lives.'

Kitchen Chemistry uses unsophisticated equipment and materials to illustrate chemical principles which are cheap and easy to find in local stores and pharmacies.

Stephen visited schools in the Western Cape, as part of the Systemic Education and Extra-mural Development Support (SEEDS) initiative of the Embassy of the Kingdom of the Netherlands. Each day the acclaimed Kitchen Chemistry Science Show was attended by between 400-700 learners. This was followed by a workshop, Toys from Trash given by Ashok Rupner from Pune, India.

During Scifest Africa, which ran from 14-20 March, Stephen ran a Kitchen Chemistry workshop. In the workshop, Stephen uses one of the science show demonstrations as an investigation with an element of formulation and testing. This was judged by both educators and learners and won the Best workshop: curriculum award. He also performed his Kitchen Chemistry Science Show to packed houses and participated in a number of other events. These included acting in murder mysteries, performing a second science show based on sound and music and introducing the daily spectacular: the laser show.

With the assistance of Scifest, Stephen is developing an educator workshop which complements the science show and a resource booklet. This gives details of all the demonstrations with suggestions for how they can be turned into classroom investigations.

Creating a culture of curiosity and learning in Africa