Leeds students are Top of the Bench 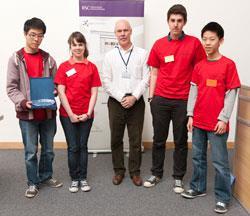 A team of students from The Grammar School at Leeds have won the RSC Top of the Bench 2012 final. The annual chemistry competition for students took place at Imperial College London at the end of March.

30 teams from across the UK and Belgium took part in the event, which tested students' knowledge of chemistry through written and practical exercises.

The winning team members each received gift vouchers and £500 for their school to spend on science equipment. Harry Li, Caroline Taylor, Daniel Voice and Matthew Li were presented with their trophy by Jason Riley from Imperial College London.

The runners-up were from Kieran Marray, George Marshall, Richard Taylor and Danill Butman from Oundle School. This year's Jacqui Clee award for the most outstanding individual contribution to the competition was awarded to Robyn Maitland from Dollar Academy in Scotland.