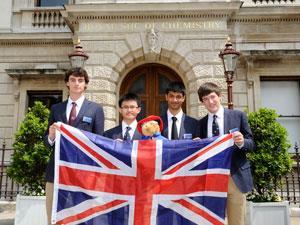 A group of students from the UK has scored highly at the International Chemistry Olympiad in Russia.

Nicole Morgan, RSC schools and colleges manager, said 'Our congratulations go to this team of talented students who have represented their country in such a superb manner. We would like to thank all the tutors who helped the team to prepare and the mentors who accompanied them to the Russia. Also, our thanks go to Ineos for their financial support of the team and the UK competition.'