Scientists have developed the molecular equivalent of a solar panel, which can act as a light signal processor 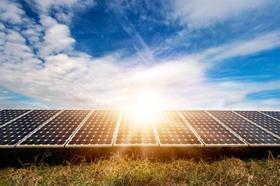 Vincenzo Balzani of the University of Bologna and colleagues have developed the molecular equivalent of a solar panel with a power source, an extension cable, and a 'drain'.

In a dichloromethane solution the tiny device can function as a signal processor responding to a flash of light.1 Such molecular-scale devices could be used as the components of a chemical computer in the future.

Balzani worked with Fraser Stoddart's team at the University of California in Los Angeles to design the three components of the molecular device. Visible light excites the electron power unit - a ruthenium complex, Ru(bpy)32+. The energy, in the form of an electron flow, is transferred through the second component, a wire-like dialkylammonium ion acting as the extension cable, and within a few nanoseconds reaches the third component, a bipyridinium compound, which acts as the electron drain.

'The ruthenium complex absorbs visible light and emits luminescence', explains Balzani. 'When the three pieces are connected, the luminescence of this ruthenium complex is quenched because of competing electron transfer from the excited state to the drain'. He adds that adding certain chemicals to the solution can disconnect the three components of the device.

The molecular-scale device might one day be used to connect different logical components in a chemical computer that would operate in a reaction flask rather than on a silicon chip. Such a device might work millions of times faster than even the best current solid state computer, though there is a huge amount of research yet to be done before that day arrives.