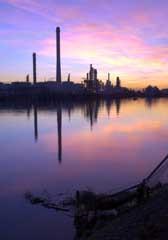 Heavy metal polluntants, such as the chromate ion, persist in Nature

Chinese chemists have shown that biofunctional magnetic nanoparticles based on mould can 'adsorb' toxic heavy metals on to their surface.1 The nanoparticles are being developed as a remediation material for metals such as the toxic hexavalent chromium.

Industrial waste streams are increasingly contaminated with metal ions. These pollutants are non-degradable and persist in Nature. Significant among them is chromium(VI), the chromate ion. Chromium(VI) compounds are increasingly used in the chemical industry of the developing world for chrome plating, dye production, battery manufacture and other applications, despite the regulation of their use elsewhere. Hexavalent chromium is more toxic than its trivalent form and is a known carcinogen by inhalation. Ingestion of Cr(VI) causes problems in the digestive tract and lungs, stomach pain and nausea.

Several techniques have been developed to remove and recover heavy metals from waste water. These include chemical precipitation as insoluble salts, separation using ion-exchange resins, which swap one material for a non-toxic one, and membrane separation. None of these is especially effective and all can be costly.

Le Deng and his team in the department of microbiology, at Hunan Normal University, in Changsha, People's Republic of China, reasoned that an effective and inexpensive approach might involve making nanoscopic, magnetic beads capable of adsorbing Cr(VI). They suggest that the material could then allow the metal, adsorbed on to the magnetic particles, to be extracted from the water with an external magnetic field.

To this end, the researchers produced beads composed of a powder of the zygomecetous mould Rhizopus microsporus var. rhizopodiformis. This biomass material is readily available and cheap. They found that the beads could be blended with nanostructured particles of iron(III) oxide and the particles coated with alginate, a viscous gum found in algal cell walls, and polyvinyl alcohol (PVA).

Tests on the new approach show that acidic conditions (pH 1) and a temperature of 28°C are the best conditions for extraction and separation of Cr(VI) from a waste water stream. The researchers used standard chemical kinetics studies to determine the role of the material in Cr(VI) adsorption and found that the beads were mechanically stable and still functional even after five cycles of adsorption of Cr(VI) and desorption with sodium hydroxide solution. Using Raman spectroscopy, Fourier-transform infrared spectroscopy and scanning electron microscopy to work out how the magnetic nanoparticles mop up chromate ions, the team reports that biosorption of the metal ions takes place through direct adsorption onto the fungal particles.

According to Deng, the results show that the combined technique of biosorption and magnetic separation has great potential as a flexible, eco-friendly and cost-effective solution for the treatment of Cr(VI) in waste water. However, the team concedes that further research is required to improve the sorption capacity of the beads and to develop the technology for the continuous removal of heavy metals in a large-scale treatment operation.